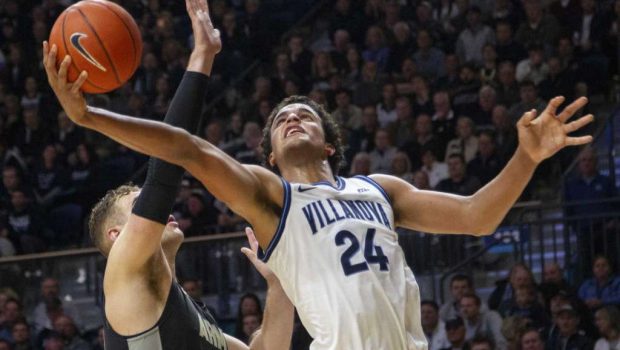 When No. 1-ranked Kansas takes the Wells floor tomorrow at noon to play the 20-ranked Villanova Wildcats, it will be a reunion of sorts.

Throughout the late stages of his college recruitment, it always looked like Jeremiah Robinson-Earl would be a Jayhawk.

After being recruited by Bill Self and the Jayhawks for years, he picked Villanova in October of 2018.

All he has done since then is average a double-double during the first 10 games of his college career, tallying 12 points and 10 rebounds per game while leading the Wildcats (8-2) in minutes played, as well.

“He’s terrific,” Self said of Robinson-Earl. “We know Jeremiah well. We’re happy for success, happy that he’s doing well. I wish he wasn’t where he’s at, but we’re doing OK here, too. So it’s probably worked out for him, very well, and he’ll have a great career there.”

According to Self, the biggest reason the 6-9, 232-pound freshman has raced out to such a strong start back east is the same thing that had Robinson-Earl so high on KU’s wish list throughout his high school career.

With good size, strength and athleticism to go along with an all-around game that fits perfectly into today’s brand of basketball, Robinson-Earl has proven to be a threat all over the floor for the Wildcats, who start him at the 5 and use his versatility as a weapon to create mismatches against their opponents.

“He’s a 4 man that’s playing the 5,” Self noted. “And he’s a skill guy that’s playing away from the basket. He’s a basketball player. He can stretch it, and then, of course, he plays so hard and (he’s) so sound.”

He has scored in double figures in six of the Wildcats’ 10 games this season, including a 24-point outburst in his college debut against Army and a 22-point night in a win over Mississippi State at the Myrtle Beach Invitational in November.

He shot 69% from the floor in those two victories and added 20 rebounds in an average of 31 minutes.

The freshman forward who is the son of former KU forward Lester Earl enters Saturday’s showdown with No. 1 Kansas shooting 35% from 3-point range and 83% from the free-throw line in 31 trips.

While the former No. 11 overall player in the 2019 recruiting class per Rivals.com is one of the signature pieces of Villanova’s present and future — the most recent ESPN.com NBA mock draft for 2020 does not have Robinson-Earl listed — he’s far from the only player on the Wildcats’ roster who has given opponents trouble.

Much like it did during the program’s recent rise to the top of the college basketball world, Villanova’s attack features high-volume and high-percentage 3-point shooters all over the floor.

Three Wildcats are currently shooting better than 43% from 3-point range and two others, including Robinson-Earl, sit at 35%. As a team, Villanova is shooting 38% from behind the arc, averaging 25 3-point attempts per game.

That recipe served the Wildcats well during their recent runs to the 2016 and 2018 national titles. And Self and the Jayhawks got an up-close look at their style in both of those seasons, losing to Wright’s Wildcats in the Elite Eight in 2016 and at the Final Four two years later.

“It’s Gonzaga plus you add two national championships to it,” Self said of Villanova’s recent surge into the upper echelon of college basketball. “Somebody asked me today if Jay’s looked at differently now that he’s won national championships, and I think coaches would beg to differ on that because coaches have always known he’s good. He’s good. He’s tough. Guys play the right way and they compete. I mean, they play hard. And we’ll get an unbelievable effort. Saturday.”

Not only has Villanova won when it has mattered most during their recent stretch of success, but the Wildcats also have won a lot.

Their 136 victories between 2014-18 are the most ever in a four-year stretch by a Division I men’s college basketball program, surpassing Duke’s record of 133 wins in four seasons from 1998-2001.

“And they won two national championships during that period,” Self emphasized. “So, what they did, obviously is going back to Duke in the ’90s, is very impressive. And they’re going to continue to be good. They’ll continue to be good as, as long as the same people are in place.”

KU, which recently became just the second team in the past decade to win 300 or more games since 2010 (Gonzaga was the other), also turned in two recent stretches that challenged Duke’s record.

Memphis actually won 137 games during John Calipari’s final four years with the Tigers from 2005-09, but sanctions erased 38 of those victories in the official NCAA record book.