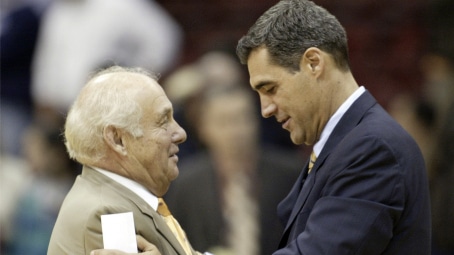 Villanova’s Jay Wright is a Philly guy, loyal to his Bucks County roots and to the people who have helped him along with the way to yesterday’s announcement that he will be inducted in the Basketball Hall of Fame in September.

“This is a great honor for Villanova basketball, Hofstra basketball, for my coaches, for my high school coach, Coach (Mike) Holland, my college coach, Coach (Charlie) Woollum, Coach (Rollie) Massimino,” Wright said. “It’s honoring all of that.” “I know he’s smiling down from heaven,” he said. “As a coach and a mentor, I think he might’ve taken the most pride in all of his assistants that became head coaches, the kind of men his players became. This is what he lived for, teaching young guys, giving them an opportunity, and teach them how to be their best. I think those accomplishments of his assistants and his players made him more proud than winning games, so I know he’s having a glass of red wine in heaven.”

Massimino, who has previously been a finalist, has not yet been elected to the Hall of Fame.

Until that enshrinement day comes, Wright will stay busy on the recruiting trail, think about possible presenters for his big day, and reflect on his entire basketball journey.

“None of this happens if I’m not the coach at Villanova,” Wright said. “This is as much of the coach of Villanova going to the Hall of Fame. Everybody’s been successful here. There’s no coaches that haven’t been successful here, it’s the best. I think my decision (to go to Villanova) showed this is the best place to coach in college basketball in the country. I think it was God’s plan for me to be the coach here. I’m just blessed that he put me on this journey and all the people he put in my life, I definitely look at it that way and I definitely have reflected on that.”

He is the sixth male who coached at Big 5 schools to be selected to the Hall of Fame, joining Ken Loeffler (La Salle), Harry Litwack (Temple), Jack Ramsey (Saint Joseph’s), Chuck Daly (Penn) and John Chaney (Temple). Longtime Thomas Jefferson coach Herb Magee, who played at Saint Joe’s, also is a member of the Hall of Fame.

The fact that Wright is about to join that illustrious group, along with all the other members of the Hall of Fame, hasn’t fully hit him yet.

“It’s seeping in,” Wright said. “Going through this weekend and answering these questions and other people knowing and feeling the love and all the heartfelt congratulations, it’s starting to seep in. I’m thinking that it’s going to take some gradual time.”