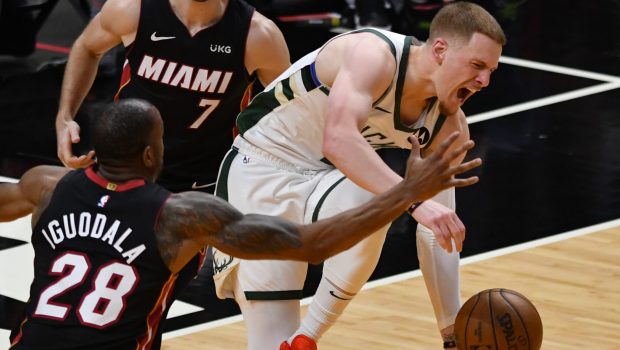 Shams Charania of The Athletic is reporting that the Bucks will be without Donte DiVincenzo for the rest of the playoffs.

He suffered a serious tendon injury to his left foot early in the Bucks’ eventual Game 3 win against the Miami Heat on Thursday night.

Significant blow for DiVincenzo and Milwaukee. He played a major role as starting guard on the title-contending Bucks, averaging 10.4 points, 5.8 rebounds and 3.1 assists this season. https://t.co/Bp3gS4UJiU

DiVincezno was forced to leave the game after starting it and playing nine minutes, finishing scoreless after shooting 0-for-4 from the field.

DiVincenzo, who starred for Villanova during their 2018 national championship season and scored 31 points in the title game against Michigan, enjoyed a career year for the Bucks, averaging 10.4 points, 5.8 rebounds, 3.1 assists, and 1.1 steals while shooting 37.9% from 3-point range in his first full season as a starter for Milwaukee.