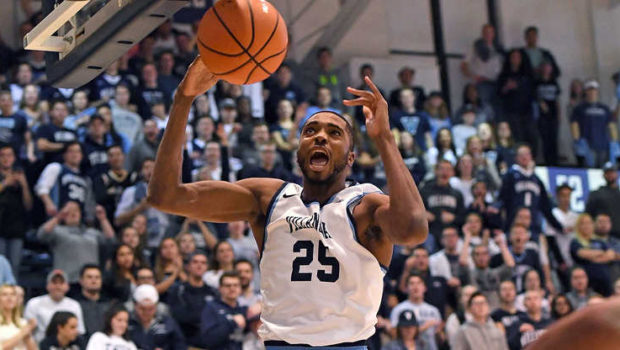 If you think that just because Villanova has regained its No. national ranking it doesn’t face Big East peril, check out tonight’s scrum with Xavier at the Wells.

“We’re excited. It’s a heck of an opportunity. Certainly not an easy one,” Xavier head coach Chris Mack said yesterday. “They’ve earned the right to be No. 1 and I think anybody in our league understands what Villanova brings to the table. Our guys are juiced up. It’s going to be a great environment. It’s going to be a big test for our team and we’re really looking forward to the challenge.”

They’ll cross paths at least one more time this season, on Feb. 17 at Cincy’s Cintas Center. They could meet a third time in the Big East Tournament, too, depending on how things shake out.

But one game can reveal plenty about this aspirational and upwardly mobile Xavier team that once again sees Villanova as standing between it and its ambitions.

For as long as Xavier’s been in the Big East, Villanova has been the standard against which all other teams in the league are measured.

The Musketeers have been unable to budge the Wildcats out of their way in a meaningful way.

In part, that’s been due to a lack of head-to-head success against Villanova, the four-time defending regular season Big East champion. The Musketeers are 1-8 against the Wildcats since entering the Big East and 0-1 against them in the conference tournament title game.

More broadly, Xavier’s 5-24 against Villanova all-time, but the vast majority of those games don’t have much bearing on the programs’ modern series.

“If we want to contend, if we want to win a Big East title,” Mack said, “you have to put yourself in positions to at least be in a one-possession game in the last four minutes.”

Villanova hasn’t quite skated through Big East play thus far, although the Wildcats’ potential is clearly that of a conference title contender.

The Wildcats were upset at Butler Dec. 30 and have allowed 92 points per game in Big East play through three games.

Perimeter defense has been suspect in Villanova’s last two games, which include the Butler loss and a 100-90 win against Marquette.

The Wildcats can also make opponents’ defense look suspect via a prolific and diverse offensive attack. All five regular starters for Villanova, along with sixth man Donte DiVincenzo, are averaging double-figure scoring.