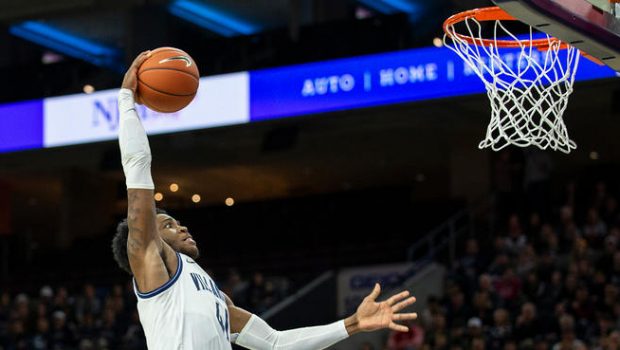 NOVA TRAMPLES OHIO 3 DAYS AFTER BEING TRAMPLED BY OHIO STATE!

The win came after a 76-51 road loss to No. 16 Ohio State on Wednesday night. Villanova fell behind the Buckeyes early and never recovered.

“In that game, we kind of backed down,” Moore said. “We learned that you have to come out and you have to keep fighting. That’s what Villanova does and that’s what we were able to do today.”

Bey (above) and Moore combined for 9-for-12 shooting and 4 of 6 from beyond the 3-point line for 26 points in that run. The Wildcats finished 14 of 31 from long range.

“I thought we had just two or three bad three-point attempts today,” Villanova coach Jay Wright said. “I think the numbers are a reflection of Justin and Saddiq moving the ball and getting good shot opportunities.”

Ohio shot 3 of 20 from behind the arc, with its first conversion from Ben Vander Plas three minutes into the second half after a 0-for-10 start. The Bobcats committed 16 turnovers.

Jeremiah Robinson-Earl had 11 points and 11 rebounds and Colin Gillespie scored 10 points for Villanova.

“I told our guys that with the exception of that seven-minute stretch at the end of the first half, we played pretty even with them” Ohio coach Jeff Boals said. “Against a team like (Villanova), the margin for error is pretty small. It was a good teaching moment for our guys.”