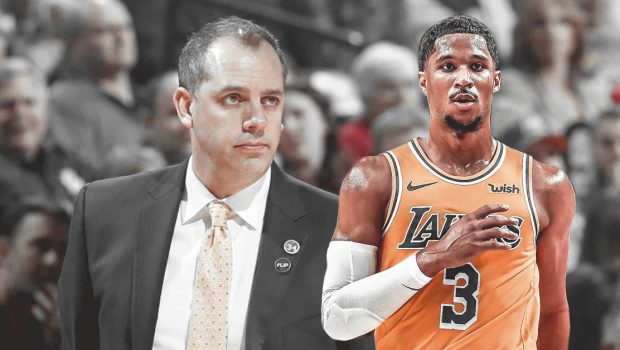 Super Nova Josh Hart has been overlooked in the chaos that the Lakers season became as LeBron James arrived and Magic Johnson and Luke Walton departed.

But new Lakers coach Frank Vogel sees Hart as a key part of the team he is building.

In a video posted by the team’s official twitter account, Vogel discussed his first impressions of LeBron James and the team’s young core of Lonzo Ball, Kyle Kuzma, Brandon Ingram and Hart. In his initial assessment, he described Hart as a “valuable piece” for the Lakers who has “no real flaws to his game.”

“Definitely the toughest piece stands out with Josh Hart, but the versatility. As a coach, you want as many guys that can dribble, pass, shoot and guard as you can, and he checks off all the boxes,” Vogel said, via Christian Rivas of Silver Screen & Roll.

“No real flaws to his game and he’s going to be a valuable piece to what we do.”

Hart undoubtedly can do it all. While he has ways to go before being a complete and all-around player, the fact that he can pass, shoot and defend could certainly prove useful for Vogel and the Lakers.

The 24-year-old swingman played in only 67 games this 2018-19 campaign with the Purple and Gold. He last played on March 19 against the Milwaukee Bucks before being shut down for the remainder of the season due to a knee injury.

In his two-year career so far, Hart has averages of 7.9 points, 3.9 rebounds and 1.3 assists. It’s up to Vogel now to maximize Hart’s capabilities and increase his numbers to become an influential piece for the Lakers.