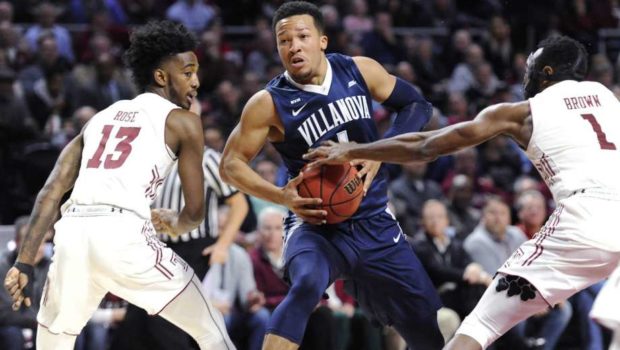 Jalen Brunson drained 31 points in Villanova’s 87-67 victory over Temple at the Liacouris Center.

“It was incredible,” Wildcats coach Jay Wright said of Brunson’s first-half performance. “He can do that. That’s not any surprise to us. He can do that every night, but we like to keep balance.”

“I just try to keep the same mentality, the same approach,” Brunson said. “Play my game, play Villanova basketball. Just being aggressive, just trying to be a killer out there and today was one of those nights where I got it going and kept shooting the ball and it kept going in.”

Brunson scored 12 of Villanova’s first 25 points to help the Wildcats to a 20-point lead midway through the first half.

Coach Fran Dunphy said a lot of Villanova’s points in the first half came off broken plays or missed assignments by Temple (6-3).

Brunson scored seven straight points on the fastbreak for the Wildcats during their early run in the first half.

Brunson corralled a rebound off junior guard Shizz Alston Jr.’s miss, pounded the ball down the court and pulled a spin move around a Temple defender for a layup. Then redshirt-sophomore guard Donte DiVincenzo found a trailing Brunson on the perimeter for an open 3-pointer, which extended Villanova’s lead to 17-4 with 13 minutes, 18 seconds left in the first half.

“They’re a team that goes on just some killer runs and they did that obviously in the first half, which hurt us greatly,” Dunphy said. “Those runs are just devastating.”

“He’s a terrific, terrific player,” Dunphy said of Brunson. “He plays with such great pace. He’s so smart. He’s got a great toughness about him, and he’s an impressive player.”

Forward Omari Spellman poured in a career-high 27 points on 4-of-7 shooting on 3-pointers. He also chipped in eight rebounds, two assists and a steal.

Wright said Temple took away some of Villanova’s perimeter players with its defense. With Villanova’s leading scorer, Mikal Bridges, finishing with a season-low seven points, Spellman found his groove early and stepped up.

Spellman hurt Temple on the perimeter and underneath the basket. He ended the first half shooting 4-of-5 from the field. At the eight-minute, 27-second mark of the second half, Spellman drove past sophomore center Damion Moore in the lane for a layup to give Villanova a 66-50 lead.

“We missed him a couple of times on threes, but we were right where we needed to be on a couple of twos and he just stepped up and made shots in our face,” Dunphy said.

Dunphy said when the Owls got “punched right in the forehead” in the first half, sophomore guard Quinton Rose helped them respond.

While the Owls trailed 25-8 with 10:37 remaining in the first half, Rose started a 13-2 Temple run with three straight 3-pointers. He finished the game with a career-high 27 points on 5-of-6 shooting from beyond the arc.

Wright said Rose has a “killer instinct” and is capable of having 35-point nights in the future.

Alston and senior forward Obi Enechionyia each had quiet nights for Temple. Alston scored 10 points on 4-of-12 shooting and missed all four of his 3-point attempts. He entered the game shooting 53.5 percent on 3-pointers.

Enechionyia missed his first five field-goal attempts and only went 1-for-7 from the field. He finished the game with three points, seven rebounds and two assists. In Temple’s past two games, he has shot 2-for-15 from the field for a combined seven points.

“[Villanova] is really a good basketball team overall,” Dunphy said. “In particular, their defense is just outstanding. They don’t let you run your stuff. You have to really just play basketball, get in gaps, be strong with the ball. And when it’s your time to step up and make shots, you gotta finish those.”