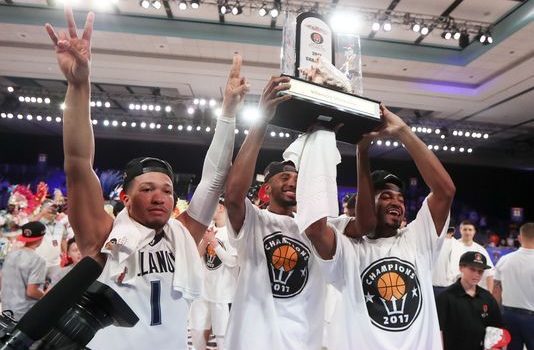 Villanova has gotten into the habit of winning preseason tournaments.

Wildcat guards Jalen Brunson and Mikal Bridges combined for 34 points in a 64-50 win over Northern Iowa in the championship game at Paradise Island, Bahamas.

Brunson and Bridges led the fifth-ranked Wildcats (6-0) in scoring in wins over Western Kentucky and Tennessee before facing the Panthers (5-2) for the title.

“We’ve come to expect their great leadership. They put us in a position to win,” Villanova coach Jay Wright said. “In all three games here, we played a great second half and a lot of that has to do with them setting the tone.”

Northern Iowa was led by Juwan McCloud’s 13 points. Bennett Koch had 10 points and 12 rebounds and Tywhon Pickford finished with nine points and 10 rebounds.

Villanova had a flawless game when it came to fouls and turnovers. The Wildcats committed only six fouls and committed three turnovers. Northern Iowa did not attempt a free throw.

”When the stat sheet says zero free throws attempted, it looks a little funny, but that has more to do with how effective Villanova played defensively,“ Northern Iowa coach Ben Jacobson said. ”They make the right switches at the right time and they just don’t foul you.

“Neither one of our teams foul that much. They only had seven free-throw attempts until the final minute or so when we fouled them to try to get the ball back.”

A 9-2 run by Villanova opened a 44-33 lead with 12:08 left, capped by a dunk by Paschall in transition after a Northern Iowa turnover.

The Panthers had 15 turnovers compared to only two for Villanova when eight minutes remained in regulation with the Wildcats leading 49-38.

The Wildcats outscored Northern Iowa 11-2 in points off turnovers. Brunson had four assists and only one turnover in 34 minutes.

“He comes to work every day, mentally prepared, physically prepared,” Wright said of Brunson, who led Villanova in the tournament in scoring, averaging 20.3 points in the three games. “He just has a great perspective on life. When you take that to the basketball court, he plays the same way — very intelligently, tough and very skilled.”