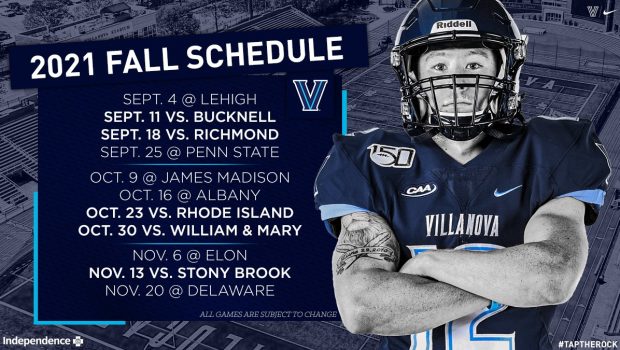 NOVA PREPARES FOR NO. 6 PENN STATE AND BEAVER STADIUM NOISE!

Noisier than the smaller, more civilized crowds the Cats are used to on the Main Line and in the Colonial Athletic Association.

So this week the 3-0 Cats practiced to the sound of leaf blowers to help prepare for the 6th-ranked Penn State, and the extremely loud atmosphere they will face Saturday with over 106,000 fans at Beaver Stadium.

“Just to simulate the noise, probably the most we have ever played in front of in the country, ” said Villanova running back Justin Covington.

Head coach Mark Ferrante is looking for any advantage he can get in this matchup.

“It’s been helping a little, but I don’t think you can mimic what it will sound like,” Ferrante says.

“Our guys are excited and want to see if they can play on the big stage,” Ferrante says.

Villanova might be an FCS school, but Penn State coach James Franklin is stressing to his players not to underestimate them. The Langhorne native has a lot of respect for Nova. After all, he wanted to go there after graduating from Neshaminy High School.

“Would I have liked to have been recruited by Villanova? Yes! Villanova gave me the stiff arm just like Penn State did. I wasn’t good enough,” Franklin said.

Nova ended practice Wednesday with an amazing gesture by celebrating the 33rd birthday of super fan Ryan Farrell, who was born with congenital CMV.

The Wildcats went wild as he crossed the goal line to score a touchdown, and they celebrated with him and sang Happy Birthday!

But scoring was not his only wish.