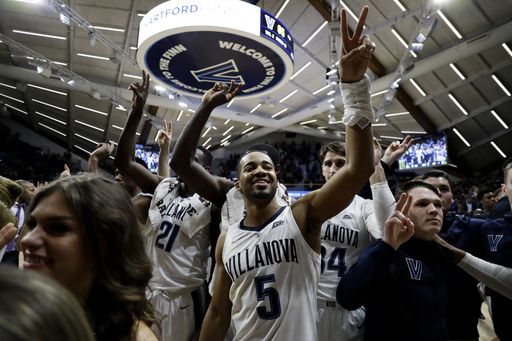 Eric Paschall scored 20 of his 25 points in the second half and No. 13 Villanova rebounded from its first Big East loss by stomping Providence 85-67.

Nate Watson led Providence (14-11, 4-8) with 18 points. The Friars have lost four of their last five but were coming off an impressive 14-point road win at St. John’s on Saturday.

After two straight 3-pointers from Paschall put Villanova ahead 53-45 early in the second half, Providence scored the next 10 points, culminating with a steal and acrobatic reverse layup from Maliek White, to take a 55-53 lead with 10:29 remaining.

But Paschall delivered two more big threes – right in front of the ‘Nova bench – to help the Wildcats close the game on a 23-6 run. Saddiq Bey and Dhamir Cosby-Roundtree helped seal the win with a 3-pointer and three-point play during the decisive spurt.