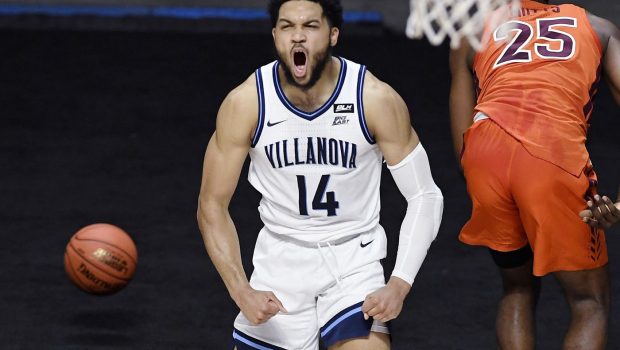 Caleb Daniels scored 24 points and made Kyle Neptune a winner in his Villanova debut as the No. 16 Villanova Wildcats beat La Salle 81-68.

“All that stuff. All we think about is playing and coaching for each other. When you do that and think that way, there’s nothing to be nervous about.”

The Wildcats returned three starters (a fourth, Justin Moore, was injured) from the team that lost a national semifinal game to Kansas.

Expectations have been tempered everywhere except on the Main Line following Jay Wright’s departure. The defending Big East Tournament champion Wildcats were picked third in a preseason poll. Villanova also earned its lowest preseason ranking in the AP Top 25 since 2008.

The polls meant nothing at tipoff.

Daniels made his first five 3-pointers and the Wildcats used an early 10-0 run to put away their city rival and spoil 74-year-old Fran Dunphy’s return to coaching. Dunphy, who had successful coaching stints at Penn and Temple, was coaxed out of retirement to lead the program where he served as co-captain and helped the Explorers to a 23-1 record in 1969 under Tom Gola.

Josh Nickelberry scored 22 points to lead the Explorers, who trailed by as many as 21 points.

“You miss the juice. The juice is awesome,” Dunphy said. “I’m sure I was rusty at some of the things I did. But it was great fun to be out there.”

The 60-year-old Wright, who led Nova to two NCAA titles, was upbeat as he mingled with fans before the game and appeared at ease watching his successor almost seven months after he cited a “lost edge” for retirement. About an hour before tipoff, Wright told The Associated Press he was happy he was back at the Pavilion.

“It’s strange but it’s exciting,” he said. “I’m excited to watch these guys. I know they’ve done a great job in the offseason. I popped in and watched some practices. I talked to them. I’m like a fan. I’m excited how to see how everything they did in the preseason worked.”

Eric Dixon scored 20 points and the Wildcats shot 54% in the first half — La Salle missed 20 of 29 shots in the half — and they were quickly on their way to a ninth straight win in the series. Daniels made six 3-pointers and 8 of 11 shots overall playing in a mask because of a broken nose suffered in a late September practice.