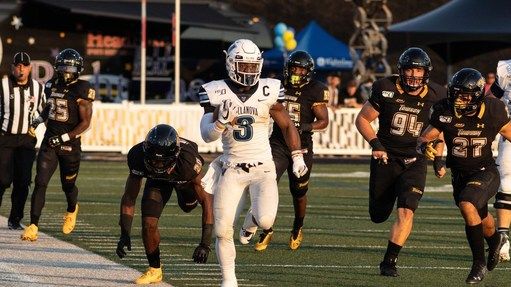 The No. 18 Villanova Wildcats scored a 52-45 overtime win at No. 5 Towson in their CAA football opener, their first victory over a top-five opponent in six years that improved them to 4-0 for the first time since their 2009 FCS national championship season.

Quarterback Daniel Smith scored from 2 yards out to give Villanova the lead in overtime before the defense clamped down on All-American Tom Flacco on Towson’s possession. The Wildcats are the STATS FCS Team of the Week.

“Hats off to Coach (Mark) Ferrante and Villanova, that is a very, very good football team,” said Towson coach Rob Ambrose, whose squad was coming off a 22-point win over defending CAA champ Maine. “They brought their A-game tonight. After last year (a 45-35 Towson road win), we knew that was coming, and they were impressive on both sides of the ball and special teams.”

Villanova played in Week Zero and won the first game of college football’s 150th anniversary season, but its first three Patriot League opponents are a combined 0-10. Towson offered a much bigger challenge.

In the OT, junior Justin Covington broke off a 23-yard run on the first play and Smith followed with his second touchdown run. Smith accounted for 349 yards of total offense and six touchdowns, including four through the air, which gives the Campbell graduate transfer 17 total touchdowns in four games. Covington rushed for a career-high 194 yards and scored two touchdowns, one on a 3-yard pass from Smith, while freshman wide receiver Jaaron Hayes had six receptions for 108 yards and two scores.