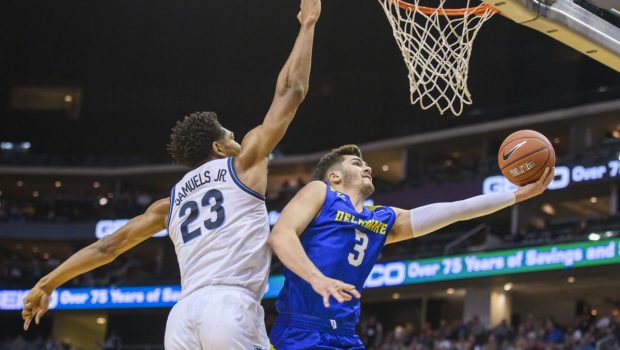 It was a neighborhood fight that took place in Newark, NJ.

And Villanova had just enough to knock off pesky Delaware 78-70.

Jermaine Samuels scored 13 of his 18 points in the second half and Villanova won its season-high fourth straight game by beating the Blue Hens 78-70 in the Never Forget Tribute Classic at the Prudential Center.

“It does boost their morale,” Wright said of sharing the scoring load. “Guys like to score. That’s one of the things we like to teach a young team — don’t evaluate yourselves on whether you score. So when five guys score they’re all happy. Guys like to score. It’s a normal human characteristic. They’re feeling good right now. ”

Nate Darling scored 29 points for Delaware, which has lost two straight after setting a school record by starting the season with nine consecutive wins for coach Martin Ingelsby. Kevin Anderson added 14 points, while Justyn Mutts had eight points and 11 rebounds.

“We had epic battles when Mike Brey was there,” Wright of the former Delaware coach who is now at Notre Dame. “I always remember those games. They’re really intelligent defensively, to Martin’s credit.”

Moore hit two free throws on the Wildcats’ next possession and Collin Gillespie, who had an off game with seven points, hit a 3-pointer to push the advantage to 52-46.

Delaware never got closer than three the rest of the way as the Wildcats opened a 10-point lead in the final minutes.

“I do think we played well on a big stage,” Ingelsby said. “We went for it. We were fearless. A testament to Villanova, they made winning plays and their free throws. I thought when we had it to three points we could put a little game pressure on them and get it tied or take the lead, and they made some plays. We could never get it to a one- or two-point game.”

Villanova hit 9 of its first 12 shots in building a 22-10 lead less than seven minutes in. The Wildcats made only six baskets the rest of the half, taking a 37-32 lead. Most of their shots were from the outside and they never got to the free-throw line.

In the opening game of the doubleheader at the Prudential Center, Mississippi State rallied late to beat Kansas State 67-61.