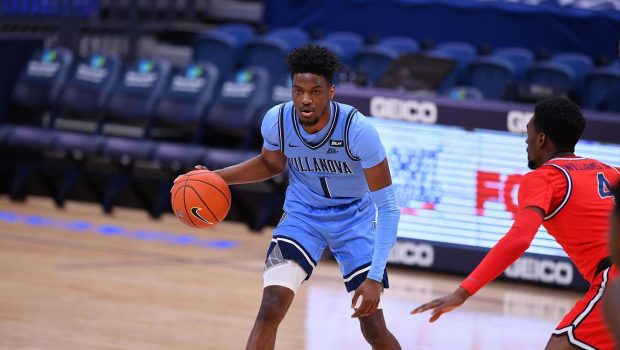 NOVA GUARD BRYAN ANTOINE OUT 6 WEEKS WITH A PATELLA

Villanova guard Bryan Antione, who suffered an injury to the patella tendon in his right knee during a recent team workout, is expected to remain sidelined for approximately six weeks as he recovers.

“The injury is a slight patella tendon issue that does not require surgery,” coach Jay Wright said in a statement.

“Bryan is fully focused on the rest and rehab the doctors have prescribed. He continues to have an amazing attitude and we’re proud of his resilience.”

In his first two seasons as a Wildcat, injuries to his right shoulder have limited Antoine’s availability. Antoine underwent major surgery on his right shoulder on May 31, 2019, shortly after arriving at Villanova from The Ranney School. He was not medically cleared until Nov. 18. A second injury to the same shoulder occurred in October 2020 and he did not return to the lineup until February 10, 2021.

Antoine stepped forward late in the 2020-21 season to make significant contributions as the Wildcats surged to an appearance in the NCAA Tournament Sweet 16. The former McDonald’s All-American contributed eight points, including a pair of clutch 3-pointers in the second half, to help lift Villanova past Winthrop 73-63 in an opening round NCAA Tournament win. He followed that with six points and two steals in Nova’s 84-61 win over North Texas in an NCAA Tournament second round game in Indianapolis.