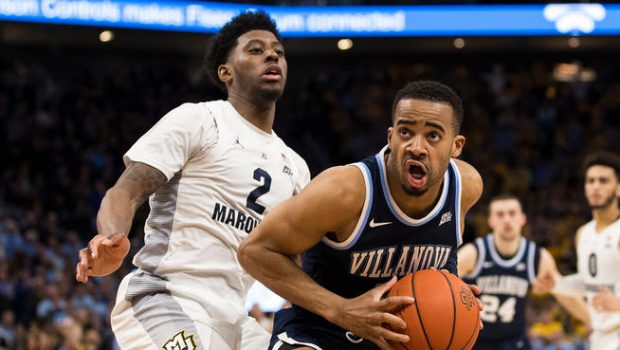 NOVA-GEORGETOWN IS A PREVIEW OF THE BIG EAST TOURNAMENT!

Selection Sunday is still 25 days away, and the Villanova Wildcats have to get down to the basics of shoring up their position in the Big East.

The No. 17-ranked Cats will look to rebound after a disappointing six-point loss at St. John’s on Sunday in tonight’s game against old rival Georgetown in DC.

That was the difference in the game.

“There was great energy in the Garden and it was great Big East basketball,” Villanova head coach Jay Wright told reporters. “I thought in the first half we were good. In the second half, they just took us out of it. They took us out of everything. We couldn’t execute any offense. A lot of our turnovers and missed shots turned into transition baskets for them. That was the game. This really was the tale of two halves.”

Joe Cremo paced led Villanova with 14 points. Seniors Phil Booth scored 13 points while Eric Paschall recorded a double-double with 11 points and 14 rebounds. For the most part, Booth and Paschall were uncharacteristically ineffective down the stretch.

“Credit St. John’s,” Wright told reporters. “They were tough and physical and took us out of everything we tried to do in the second half.”

The schedule becomes even tougher for Georgetown as it looks to snap a nine-game losing streak to Villanova. The Wildcats have won by an average of 17 points in their last nine wins over the Hoyas. Georgetown’s last win in the series came on Jan. 19, 2015, a 78-58 victory.

Following the 15-point loss to the Pirates, Georgetown head coach Patrick Ewing said that he was extremely disappointed.

“They beat us in all phases of the game,” Ewing told reporters. “We were poor defensively. We didn’t execute our offense well. We didn’t show up.”

If the Hoyas harbor aspirations of upsetting Villanova, they’ll need another strong performance from Govan. Last week, Govan was named as one of 10 finalists for the 2019 Kareem Abdul-Jabbar Award honoring the top center in college basketball.

Govan leads the Hoyas in scoring (18.1) and rebounding (7.8). He has seven double-double this season while also crossing the 1,500-point plateau for his career.

The Hoyas have dropped three of their last four games, including two in a row. The last time they face Villanova, they lost 77-65 on Feb. 3.

After winning 76-67 on the road against Providence on Feb. 6, they have lost consecutive games to Butler and Seton Hall.