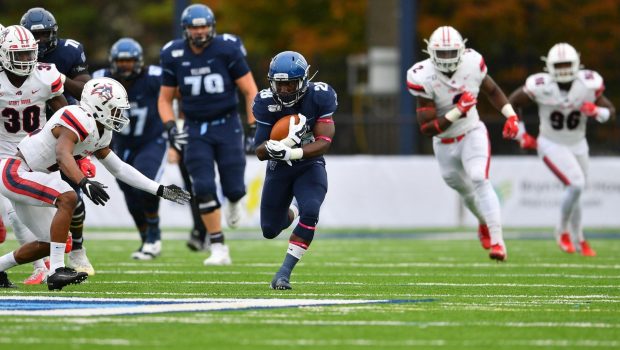 The visiting Seawolves scored three times in the final 4:45.

There were a combined 987 yards of total offense between the teams, including Villanova amassing 509 yards and building an 18-point halftime lead.

Quarterback Daniel Smith threw for 249 yards and a touchdown, while a pair of true freshman skill players in wide receiver Jaaron Hayek and running back TD Ayo-Durojaiye each threw for a touchdown on first-half trick plays. Hayek and Smith combined for a 68-yard touchdown late in the first quarter for the Wildcats first points of the game on a play that wound up with Smith being credited with his first career catch.

Smith was 17-of-29 on the day and the three Villanova passers combined for 341 yards through the air.

Stony Brook began the eventual game-winning comeback on a 10-yard touchdown pass from Tyquell Fields to Shawn Harris with 4:45 to play, then scored again on a one-yard run by Fields which made the score 35-33 with 1:32 left. A two-point conversion attempt by the Seawolves resulted in a dropped pass in the end zone, while an ensuing on-side kick by Stony Brook rolled out of bounds at midfield.

The final Wildcats possession of the night began at the Seawolves 45-yard line with 1:26 remaining and Stony Brook having just one timeout. Consecutive sacks cost Villanova 22 yards and led to a timeout with 1:15 to play, while the Wildcats eventually had to punt the ball back to the Seawolves with the clock showing 21 seconds.

Fields completed passes of 19 yards and 40 yards on two rushed offensive plays, with Stony Brook spiking the ball after each of those completions. The clock was stopped with three seconds to play and Nick Courtney made the 22-yard field goal to end the game. Fields wound up 21-of-37 for 320 yards with one passing touchdown and two rushing scores.