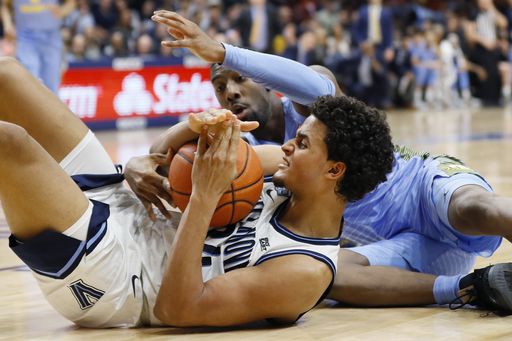 Collin Gillespie had 14 points and hit a pivotal 3-pointer with 2:03 remaining, Jeremiah Robinson-Earl had 17 points and 11 rebounds and No. 15 Villanova held on for a 72-71 victory over No. 18 Marquette to snap a three-game losing streak.

The Golden Eagles had trimmed Villanova’s 18-point second-half lead to five points with 3:58 left before Villanova scored the next five, capped by Gillespie’s 3, to take a 10-point lead and get some needed breathing room.

”Collin runs the show,” Villanova coach Jay Wright said. ”He finds people and he had a huge shot, too.”

Jermaine Samuels added 14 points for Villanova (18-6, 8-4 Big East). The Wildcats had surrendered an average of 75 points in defeats to Creighton, Butler and Seton Hall – all teams currently ranked in the AP Top 25. Villanova, which pulled into a second-place tie with Creighton in the Big East, avoided losing four in a row for the first time since Feb. 15-25, 2012.

The Wildcats led by as many as 15 points in the first half and came out strong to open the second half. Villanova scored the first nine points after the break, five of which came from the free-throw line, to lead 47-29 with 16:27 remaining. Marquette continued a pattern from the opening 20 minutes by missing its first six shots after the break.

Wojciechowski went to his bench, and the Golden Eagles slowly cut into the Villanova advantage.

Even after Gillespie’s 3, Marquette wasn’t quite done. Howard’s 3 with 43 seconds left pulled the Golden Eagles within 71-68. After Saddiq Bey missed, Villanova intentionally fouled Howard. He missed the first and then failed to hit the rim while trying to miss the second, giving the ball to Villanova. Robinson-Earl then made the second of two free throws with 4 seconds left before Howard drained a 3 at the buzzer.

”They played together and competed together,” Wojciechowski said of the reserves he called on in the second half. ”They gave us a chance to win a game we had no business winning.”