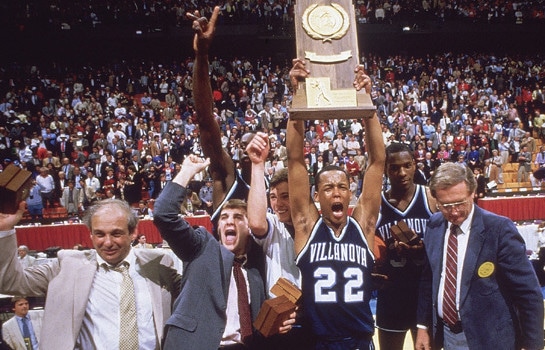 NOVA BEATING GEORGETOWN IN ’85 MAY BE THE BEST TITLE GAME EVER!

Today was supposed to be the first day of 2020 March Madness, with millions of hoops junkies gathered in sports bars watching the NCAA’s march to the title.

Instead, we’ve got no tourney because of the coronavirus.

So the New York Times asked a bunch of coaches what their shining moment has been in history.

And Bill Self, the coach of top-ranked Kansas, chose well:

What he’d watch: The 1985 men’s national title game, which featured Georgetown and Villanova, and the 2008 national championship game between Kansas and Memphis.

Why he’d watch them: Self, like many coaches and fans, usually favors games decided by “the shot.”

Forget the rebounding, the defense or whatever happened on some possession in the first half. For Self, all of it is a mere prelude to a grand moment that might not even come.

“That’s what I remember when I think of games: I think of the shot in the biggest games,” said Self, who had Kansas in position for the No. 1 overall seed in this year’s tournament.

But he remains taken by the 1984-85 Georgetown team that rose out of Washington when he was 22 years old. The Hoyas seemed an unbeatable behemoth: Patrick Ewing was the center, and John Thompson was leading a program trying to repeat as national champion.

Enter Villanova, a team that had not cracked the top 20 in any poll that season, in a showdown with the national title on the line.

“They were going up against a team that was head and shoulders better than everybody,” Self said. “If a seven-game series was ever played with that team, everyone would have lost. But that’s what makes the N.C.A.A. tournament so good: You just have to be better one night.”

Villanova proved plenty scrappy and made 79 percent of its shots against a defense that had stopped just about every other offense it faced. The teams swapped leads nine times in the second half before the upstart Villanova took the lead for good.

And 23 years later, Self got to see one of those shots he so enjoys.

Kansas and Memphis had rosters stocked with future N.B.A. players, and Kansas took a 5-point lead into halftime. Memphis found more of an offensive rhythm after intermission and went up by 9. There were two minutes to play.

Kansas hit some free throws, and Darrell Arthur landed a basket. Then, with 2.1 seconds to play, Mario Chalmers sized up a 3-point shot and tied the game. Kansas dominated overtime.