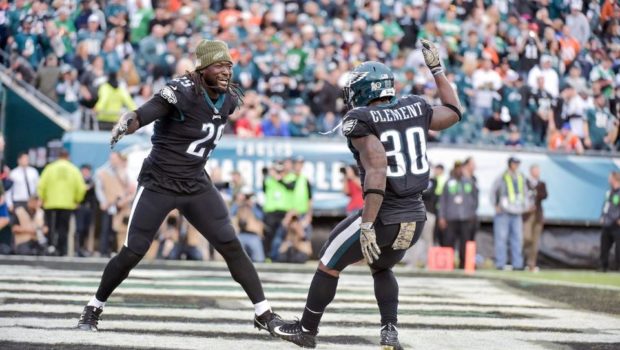 IT’S NOV. 6, AND THE EAGLES ARE THE NFC’S TOP PLAYOFF SEED!

The Eagles don’t play again until Sunday night, Nov. 19, when they take on the Cowboys in Dallas.

So, here’s something to keep Eagles Nation warm until then — their playoff position!

No. 1 seed — Eagles (8-1): First place, NFC East. The Birds keep rolling with a high-powered offense and a nasty defensive front. They go into their bye as a virtual lock for a playoff berth, but with two games left against Dallas, the parts are still moving.

No. 2 seed — Saints (6-2): First place, NFC South. New Orleans had no problem with Tampa Bay, and thanks to the Rams’ win and the Seahawks’ loss, the Saints got into the three-way tie it needed with Minnesota. The Saints have five conference victories to hold the current tiebreaker for the second bye position.

No. 3 seed — Vikings (6-2): First place, NFC North. Minnesota slid a spot during its bye, despite beating New Orleans way back in Week 1. It gets a direct shot at the Rams in Week 11, too.

No. 4 seed — Rams (6-2): First place, NFC West. After Los Angeles ripped the Giants, it was treated to the bonus of Seattle being shocked at home by Washington. The Rams need to play Minnesota and New Orleans back-to-back in couple weeks before looking forward to its Seahawks rematch in Week 15.

No. 5 seed — Panthers (6-3): Second place, NFC South. Carolina beat Atlanta to stay right behind New Orleans, to which it lost earlier this season. But there’s not much breathing room for the Panthers with several teams bunched up behind them as contenders.

No. 6 seed — Cowboys (5-3): Second place, NFC East. While Dallas was dispatching Kansas City, it got the bonus of rival Washington providing some help in Seattle. The Cowboys for now hold the last spot with one more conference win than the Seahawks.

No. 1 seed — Steelers (6-2): First place, AFC North. Pittsburgh had a bye and didn’t change position. It holds the top spot by virtue of a better conference record (4-1) than New England.

No. 2 seed — Patriots (6-2): First place, AFC East. New England also had a bye and was happy to see Kansas City lose to Dallas. It gets a direct shot at Pittsburgh in Week 15.

No. 3 seed — Chiefs (6-3): First place, AFC West. Kansas City fell a half game behind a bye position with its loss at Dallas and made the division a little tighter, having already lost once to Oakland.

No. 5 seed — Jaguars (5-3): Second place, AFC South. Jacksonville beat up Cincinnati without Leonard Fournette to keep pace with Tennessee, and it also jumped Buffalo with its fifth conference win.

No. 6 seed — Bills (5-3): Second place, AFC East. Buffalo got upset by the Jets, but the Bills still hold a full game lead over division-rival Miami, which lost Sunday night.