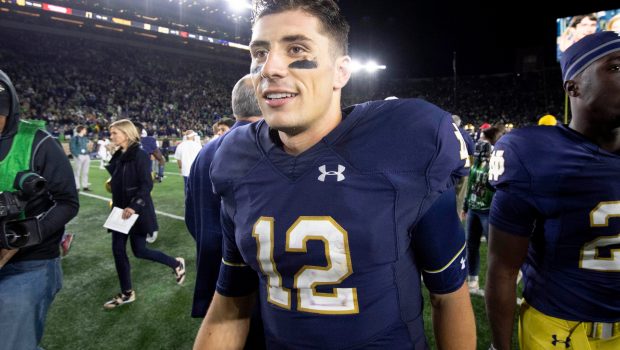 NOTRE DAME’S AMAZING 2 OT WIN OVER CLEMSON — ASTERISK OR NOT!

In this strange college football season that has been characterized by games postponed and cancelled because of the pandemic, this will undoubtedly be:

THE GAME OF THE YEAR!

No. 4 Notre Dame’s double-overtime victory over No. 1 Clemson will be remembered as a game of historical consequence that may have few consequences.

It was steeped in history, but could be recast in just a few months. It had the requisite historical touchstones, officiating controversies (and delays) and a scintillating performance by a star — freshman quarterback D.J. Uiagalelei — that we’ll be gazing at for many more autumns.

Notre Dame outlasting Clemson, 47-40, in double overtime will be a vintage bottle in the most elite of Notre Dame collections. Even if a speech by President-elect Biden bumped it off NBC for a while. It showcased the onions of senior quarterback Ian Book (above), the otherworldly disruptive ability of linebacker Jeremiah Owusu-Koramoah and highlighted Notre Dame’s ability to dominate in the trenches against one of the standards in college football.

It’s the most impressive regular season victory of the 11-year Brian Kelly era, the first Irish win over a No. 1 team since 1993 and it required a 91-yard drive in the final 1:48 for Notre Dame to tie the game and force overtime. “A night I’ll never forget, no matter how old I am,” Book said.

But this is where reality intersects history, as Book may need to recapture that magic for another night. Consider this the most 2020 sentence of the college football season, the kind that would get you drug tested if you wrote it in February: For Notre Dame to make the College Football Playoff, they may still need to beat Clemson in the ACC title game with Trevor Lawrence at quarterback, as he’ll be back from his COVID-19 hiatus.

Notre Dame is in position to win the regular season ACC title, which would be a humorous historical footnote and the rare first for a program that’s accomplished nearly everything. The Irish would be 1-for-1 in their history, as the pandemic forced them to have a shotgun football marriage with the ACC for a season.

In terms of the big picture, Notre Dame is certainly in much better position to secure the program’s second-ever College Football Playoff bid. But as Clemson’s Dabo Swinney was quick to point on Saturday night in the wake of his program’s first regular-season loss since 2017, Clemson still has everything in front of them.

Notre Dame will vault up to No. 2 or No. 3 in the national rankings, with the sport’s most impressive win this season. But with a matchup against Clemson likely in the ACC title game, there’s little assurance that this win keeps them from slipping past No. 4 if they lose that game. And how will the CFP committee view a win over Clemson without Trevor Lawrence?

Notre Dame has a trap game at Boston College this week, and Kelly’s focused on first-world problems. “We’ve got a target on our backs now,” he said. “There are so many more things on my plate.”

Clemson’s 36-game regular season win streak ended thanks to Notre Dame’s (7-0, 6-0) early dominance and late heroics. The Irish led by 13 late in the second quarter, much thanks to a defensive front that held star tailback Travis Etienne to 28 yards on 18 carries and a 23-yard fumble return for a touchdown by Owusu-Koramoah.

But Clemson took over the game in the second half and bungled a chance to ice the game late in the fourth quarter thanks to a holding penalty and Etienne’s poor decision to run out of bounds. Clemson’s drive started with 2:10 remaining in the game and somehow only took 22 seconds off the clock and burned just one Notre Dame timeout, which proved a critical game-management blunder. “Mistakes caught up with us,” Swinney said.