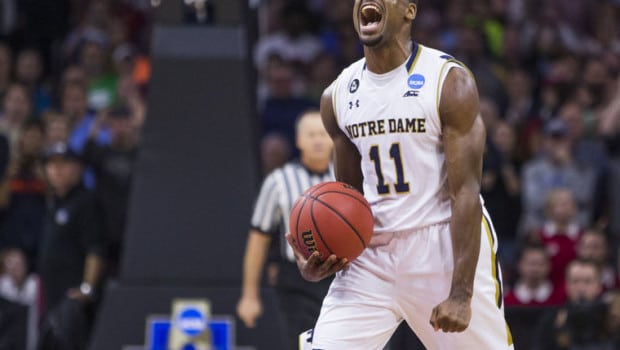 Notre Dame coach Mike Brey is getting used to these kind of games.

Once again his Irish came from behind after a poor shooting half and orchestrate a frantic finish to survive last night at ther Wells in South Philly.

No. 6 seed Notre Dame beat No. 7 Wisconsin 61-56 to advance to the Fighting Irish’s second consecutive Elite Eight. Notre Dame led for just 2:13 of the game — but it was the most important part.

With Wisconsin leading by one and 19.5 seconds to play, Irish guard Demetrius Jackson (above) stole the ball from Badgers star Nigel Hayes and scored an easy layup.

After starting the game 1-for-10 from the field, Jackson scored 10 points in the final four minutes of the game.

“That kind of sums up madness, just flying around, doing whatever it takes to win the game,” Jackson said. “I’m so thankful to be able to go back, continue to put the jersey on, continue to play and represent our university.”

Perhaps Brey knew the Irish had luck on their side — on Good Friday, no less; certainly the long two-point jump shot Jackson launched late had to suggest that. It bounced off the rim, went sky-high and swished through the net.

After a game filled with bad bounces and missed layups, the game’s most unlikely shot fell.

“The Irish don’t lose on Good Friday or Easter Sunday,” Brey told his team in the locker room. “Can I get an Amen?”

Zach Auguste also hit two big free throws late, hitting both after Wisconsin’s Ethan Happ fouled out after a scramble on the court with 46.5 seconds left. That gave Notre Dame a 55-53 lead. Auguste finished the game with yet another double-double.

Notre Dame stole the win from the grasp of the Badgers, who thoroughly outplayed the Irish for much of the game, the first half in particular. Notre Dame’s 19 first-half points were its lowest point total of any half this year.

“We were laughing, I said, gosh, we can’t play any worse,” Brey said, reflecting on most of the game. “Guys were kind of laughing, and I said we’ll play better. I said we’ve always been great in second halves. Down the stretch from 12 min — I said, fellas, they’re going to feel us coming. We’re coming. That’s what we’ve done all year, not only in this tournament. We’re going to get this to a game situation. Keep plugging.”

Once again, Brey and his players made the necessary second-half adjustments to pull off a most thrilling victory. Wisconsin contributed with poor shooting and bad turnovers down the stretch, too.