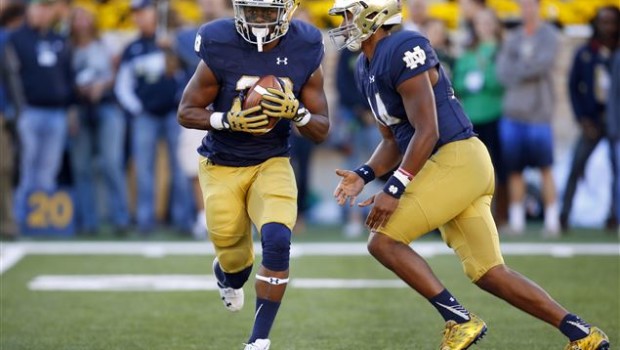 The whole town’s talking about the Temple-Notre Dame game Saturday night at the Linc.

After all, the Eagles are off until Nov. 8, so the Owls and the Irish are getting everyone’s attention.

Including ESPN’s “Game Day Live,” which will emanate from Independence Hall this Saturday morning.

Temple is undefeated and riding the jet stream of hype and hope.

But what’s in it for ND?

With the countdown underway to when the College Football Playoff selection committee releases its first rankings on Nov. 3, the debate is already simmering as to whether Notre Dame has any realistic chance at becoming one of the four teams invited to the post-season party.

But three weeks later, No. 11 Notre Dame (6-1) appears to have played its way into at least a “definite maybe” line of thinking.

Based on its mission statement and what we saw last season, the playoff committee heavily weighs and highly rewards strength of schedule.

And at the time of Notre Dame’s loss to then-No. 12 and now-No. 5 Clemson, the remaining Irish schedule didn’t appear to carry enough power for any chance of playing back into playoff consideration.

But after good runs from a few future Notre Dame opponents, the lack of its remaining scheduling “umph” doesn’t necessarily appear to be the case anymore. In fact, the back end of Notre Dame’s 12-game slate after today’s bye has unexpectedly emerged as the most potent and powerful portion.

The surprising success of No. 22 Temple and No. 25 Pittsburgh, along with the terrific play of No. 10 Stanford after a season-opening loss, leaves Notre Dame with three games in its last five against teams ranked in this week’s poll, potentially providing the Irish a necessary schedule boost to build its playoff resumé.

But clearly, any potential playoff berth for the Irish will require some help from above — as in assistance from those rated ahead of them — including two other one-loss teams: No. 8 Alabama of the SEC and No. 10 Stanford of the Pac-12.

About the only detail we know for sure is that Notre Dame must win its last five games and finish 11-1 to have any chance at playoff consideration, a difficult journey that begins next Saturday against a talented Temple team that pulled an impressive 24-14 road upset Thursday of East Carolina.

The rest is guesswork at this point, but the following analysis is the best course for the Irish, all of which illustrates just how difficult it will be for Notre Dame to get in.

*Stanford Sustains — Given there are five “Power Conferences” and only four playoff spots, two of these five leagues would presumably have to be left out for independent Notre Dame to get in. The best chance of taking one conference out of the equation would be for the Irish to beat Stanford in the regular-season finale and then have the Cardinal still win the Pac-12 Championship Game. This scenario would eliminate any Pac-12 team from the playoff.

*Michigan Magic — With losses already to Utah and Michigan State, Michigan is out of playoff contention. But if it wins out — which would include a victory over No. 1 Ohio State in Ann Arbor — the Wolverines could still win the Big Ten title. The problem is, you likely have to find two losses from undefeated Michigan State for this plot to play out … One to Ohio State? Maybe at Nebraska? And perhaps an MSU loss to a pesky Iowa team in the Big Ten Championship game could factor in? That’s ssuming the Spartans make it to the title tilt.

*Rebels Yell — With two overall losses but only one in the SEC, playoff hopes for Ole Miss have already been dashed, but a conference championship still remains a possibility. The Rebels play in the SEC’s West Division and its lone league loss came to Florida from the East. Ole Miss will presumably need to win at home against No. 5 LSU to have any chance at a league title. And if it can beat LSU and win out, the Rebels would also own the tiebreaker over Alabama and Texas A&M in making the conference championship game from the West Division.

Much can and will change between now and early December when playoff bids are passed out. But assuming one of the two ACC undefeated teams, Clemson or Florida State, will represent its league in the playoff, and either Baylor or TCU will come out of the Big 12, an 11-1 Notre Dame team will still need at least two of these three above scenarios to unfold for playoff consideration.

Through eight weeks at this time last year, a 5-1 Ohio State team was ranked No. 13 in the country, but priming itself for an unlikely run to a national championship.