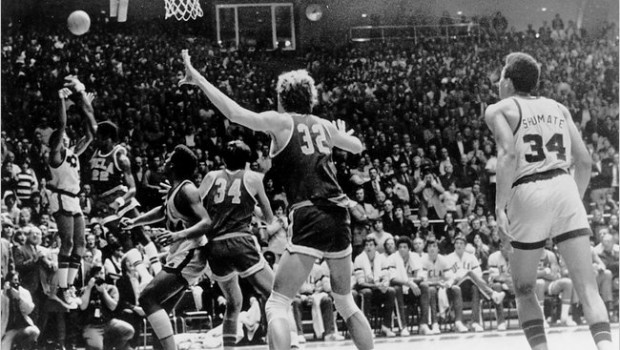 NOTRE DAME, 11-PT. DOG TO KY., HAS BIGGER UPSET IN ITS REPERTOIRE

Three wins away from a perfect season, Kentucky looks capable of overwhelming every other Elite Eight team, including its foe on Saturday, Notre Dame. On Friday, the betting line had the 37-0 Wildcats as an 11-point favorite over the Fighting Irish.

But Notre Dame has a history of breaking streaks.

In fact, the Irish broke the longest streak in men’s Division I history when they played UCLA on Jan. 19, 1974. At the time, UCLA had won 88 consecutive games, a stretch that included three national championships. Since then, UCLA’s streak has been surpassed only by Connecticut’s women’s team, which got to 90 in 2010. Notre Dame’s victory wasn’t the greatest upset in NCAA history, considering that the Irish were undefeated, playing at home and ranked No. 2. But being No. 2 behind UCLA back then was akin to being second behind Kentucky this year. Like Kentucky, UCLA seemed to belong in a league of its own. Bruins star Bill Walton (photo above) hadn’t lost a game since his junior year of high school.

The game took place as part of a home-and-home arrangement the two teams arranged in part so that UCLA coach John Wooden, an Indiana native, could return to his home turf. Coaching the Irish was Richard “Digger” Phelps, whose reign there lasted from 1971 to 1991. Notre Dame was the last team to have beaten UCLA, the Irish’s Austin Carr having scored 49 points against the Bruins in that 1971 game.

Ahead of the 1974 game in South Bend, Phelps put his players through an unusual exercise—cutting down the nets—in an effort to lift their confidence. But for the most of the game, that didn’t appear to help. With 3:32 remaining, UCLA led by 11, even though Walton was wearing a back brace because of an injury suffered the previous week against Washington State. In the first moments of the Notre Dame game, Walton also took an elbow to the face, bloodying his nose.

Hoping to rally from that double-digit deficit, Phelps called timeout and instructed his players to press. The Irish scored, stole the inbound pass and scored again, reducing UCLA’s lead to seven. With no shot clock at the time, UCLA tried dribbling out the clock, but the Irish stole the ball again and made a layup. A traveling call gave the ball back to the Irish, and with 1:49 remaining a 17-foot jumper reduced the lead to three. A UCLA miss led to another Irish jumper, and the deficit was one.

Then an offensive foul against UCLA returned the ball to Notre Dame, and with 29 seconds left Dwight Clay made the go-ahead jumper for the Irish. The Bruins, who hadn’t scored since the 3:32 mark, failed to score on their final possession.

A week later at Pauley Pavilion in Los Angeles, UCLA regained its No. 1 ranking by trouncing Notre Dame 94-75. But neither team made it to the national championship that year. North Carolina State beat Marquette to claim that year’s trophy.

Basketball Hall of Famer Adrian Dantley, a member of that 1974 Notre Dame team, says the upset required a mixture of luck, confidence and good play. “We thought we could win,” Dantley said in an interview. “They had a couple of turnovers. We didn’t quit and the ball bounced our way.”

Is this year’s Notre Deam team a squad of streak busters? Dantley is skeptical. “To beat Kentucky, a team will need to play physical and clean,” he said. “Try to get under their skin. Notre Dame is not that type of team.”

Dantley notes that this Notre Dame team is hot. After starting the season unranked, it broke into the top 25 in December and steadily worked its way to No. 8. Notre Dame has won 11 of its last 12 games, including wins over Duke and North Carolina to win the Atlantic Coast Conference tournament—in Greensboro, N.C., no less. In defeating Wichita State on Thursday, the Irish shot 75% in the second half, mixing three pointers with mesmerizing flashes to the basket.

But this is a different caliber of opponent. Dantley suggests that a key figure on the Notre Dame team might be its Catholic chaplain. “They’re going to need God to beat Kentucky,” he says.