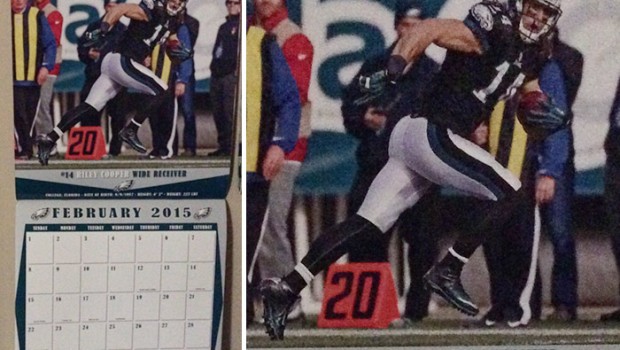 There is nothing phonier than phony outrage.

You know what I mean.

When a Fox News host or commentator calls President Obama a socialist for espousing something Ronald Reagan was in favor of.

Or when some idiotic talk show host in Philly flips out over Sam Hinkie’s vow of silence.

Now we have the Eagles and Riley Cooper.

There is plenty to be outraged about.

His racist remarks that surfaced in August 2013 were outrageous.

And so was his mediocre performance on the field in 2014.

The Eagles said they were not responsible for an unfortunate juxtaposition in the team’s official 2015 calendar.

A photo of wide receiver Cooper is featured for February, which is Black History Month. Cooper drew criticism nearly two years ago after an online video appeared in 2013 showing him using racial epithets during a concert.

“We do not oversee the production of the annual team calendar,” the Eagles said in a news release. “We do not provide any input about the players who are featured or where those pictures appear in the calendar. The NFL licenses the production of that calendar to a third party, and we do not have an opportunity to review the material.”

The team calendar mishap was the focus of an initial report Thursday by TMZ.com.

The Eagles weathered a storm of negative publicity when the video of Cooper appeared online during training camp in 2013. Cooper took a leave of absence from the team for several days. He returned and apologized to his teammates, many of them in one-on-one conversations.

Michael Vick, then one of the Eagles’ quarterbacks, and wide receiver Jason Avant vouched for Cooper’s character publicly and among their teammates.

Cooper became a starting wide receiver that summer after Jeremy Maclin tore his ACL during a practice session. After the season, the Eagles signed Cooper to a new five-year, $22.5 million contract.

Cooper started all 16 games in 2014. He caught 55 passes for 577 yards and three touchdowns. The website Pro Football Focus, which grades every player, rated Cooper as the lowest-graded wide receiver in the NFL for 2014.