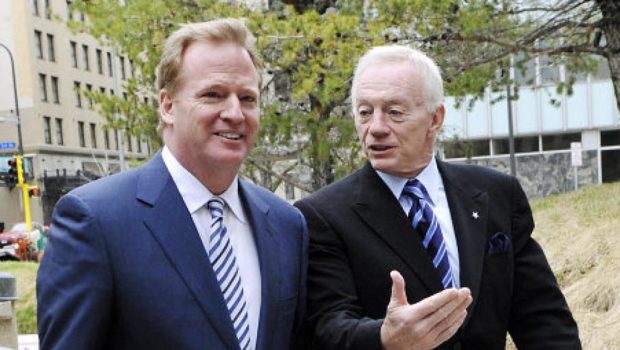 NOTHING LASTS FOREVER! NOT EVEN THE NFL’S WINNING STREAK!

Over the past 50 years, the league owners have built a world in which they only win. Their annual revenue, now halfway to their goal of $25 billion, climbs yearly. They’ve won every labor negotiation with ease. They have built an internal system in which they have full disciplinary control, so they (eventually) win every battle with players. They have control over television networks. Even when ratings dipped last season, NFL ad revenue was at an all-time high. That’s a half-century hot streak.

This world kept the NFL and its power structure from ever being vulnerable to any truly existential threats. When the Ray Rice domestic violence scandal hit in 2014, commissioner Roger Goodell’s job was never in doubt; he was unassailable because of the colossal TV ratings and revenue. When the league bungled the Deflategate investigation, it still won in the end, and Tom Brady served his four-game punishment. And despite nearly the entire American public agreeing that head injuries are a problem, only a small fraction of fans say they aren’t football fans because of it.

However, the 2017 season marks the first time the NFL has met problems that it cannot, in the parlance of our times, tweet through. This is an abbreviated list of the issues the league faces and seems unable to solve: double-digit ratings declines over the past two years; a protest debate in which players are pitted against the president of the United States, who in turn has pitted himself against the NFL; sponsors so unhappy that there was a war of words over whether football is hurting sales of Papa John’s pizza; news that CTE could soon be detected in living people; and more protracted and convoluted court battles, most recently featuring Dallas Cowboys star running back Ezekiel Elliott.

For years, the league has screwed up multiple things and won. And because for so long defeat didn’t seem possible, the upper echelons of football power are simply not equipped for losing: