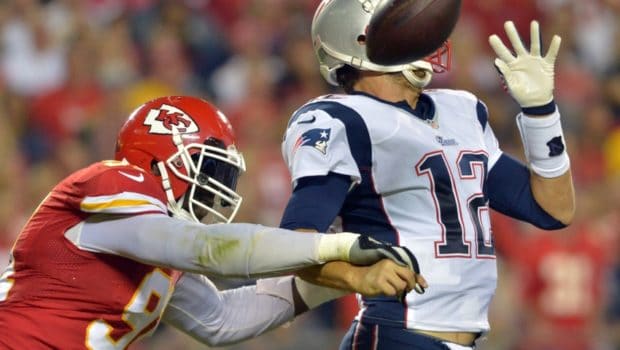 NOT SO SUPER! PATS AND THEIR ANNOYING FANS SMACKED BY CHIEFS!

From the Boston Globe:

This was Bill Belichick’s post-midnight confession after the Patriots were spanked by Kansas City Chiefs, 42-27, in their season opener last night at Gillette Stadium.

I guess this means 19-0 is out of the question.

We all know the Patriots and their fans were getting a little full of themselves. After winning the greatest Super Bowl ever, they won the offseason. They went all in and assembled the perfect football team. Here in New England, football was not about competition anymore. Simply coronation.

After winning the Super Bowl in Houston, the Patriots partied. They handed out gaudy rings with 283 diamonds (get it, Falcons? 283 diamonds, as in 28-3). Team Trump went to the White House, patented the “Blitz for Six,’’ motto, and gleefully cooperated with another NFL Films homage to their superior preparation and brainpower. The Patriots not only beat you, they embarrassed you. They made sure everyone knows that they are smarter than all the other teams they play. They anticipate everything.

Tom Brady spent the offseason selling everything short of Amway and reverse mortgages, appeared with Tony Robbins, and told us that he’s going to play until he’s 50. He intimated that he’s bulletproof from injuries and Father Time. Meanwhile, owner Bob Kraft sold sneakers and had his photo taken with anyone who’s famous: