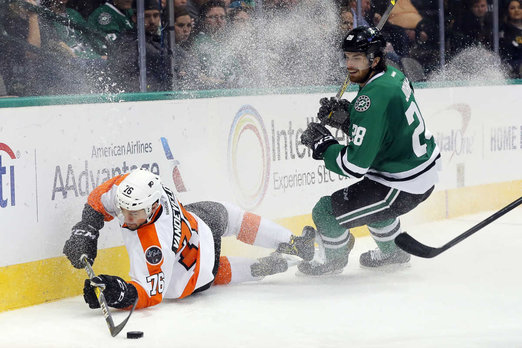 Adam Cracknell scored the tiebreaking goal on a rebound early in the third period to lead the Stars to a 3-1 victory, snapping the Flyers’ 10-game win streak.

Radek Faksa and Jordie Benn also scored for the Stars and Antti Niemi stopped 31 shots, including three during a Flyers power play in the closing minutes.

Flyers defenseman Ivan Provorov also hit a goalpost during the late power play for the second time in the third period.

“When we went down by one, we had confidence to make plays,” Flyers coach Dave Hakstol said. “We didn’t get a positive bounce on any of those plays.

“I don’t think I learned anything (about the team) through the winning streak. I think it was just a continuation of our group showing up and working hard.”

Cracknell broke a 1-1 tie at 2:27 of the third. Flyers goalie Steve Mason stopped a shot by John Klingberg, but the puck rebounded to Cracknell’s feet and he put it on his stick and sent a wrist shot into the net for his fourth.

“He really does the little things,” said Ttker Seguin, who also had an assist on Cracknell’s goal. “He’s always making smart plays.”

Benn, whose penalty gave Philly its only power play with 2:58 left, scored into an empty net with 18 seconds to go.

A week earlier, Philadelphia had come back from a 2-1 deficit with three power-play goals in the final 4 minutes. The Flyers lead the NHL with 28 goals with the man advantage.

“We learned from our last game in Philly that we had to keep that team off the power play,” Cracknell said. “We had a great kill, and then (Benn) ends up with the empty-netter to seal the game for us.”

Faksa’s fourth goal also was on a rebound. He assisted on Benn’s goal and played most of the penalty kill.

Tyler Leier scored his first NHL goal in the first period for the Flyers, also on a rebound.

“You look at (the first) three goals in the game, they’re all identical,” Ruff said.

Niemi improved to 7-2-1 at home this season, and 5-1 against Philly in his career.

Dallas entered the game ranking 29th in goals against average (3.11). In the last eight games, beginning with a shutout at Colorado, the Stars have gone 4-4 and allowed only 2.00 goals per game.

“When you’re the worst in the league at goals against, something has to change,” Ruff said. “We made a big change going into Colorado, and since then I think it’s really helped our defense. With that has come some confidence. Since that point, we look like a team that can win every night.”

During the Flyers’ streak, they outscored opponents 36-22.

Dallas also had only one power play, during which the short-handed Flyers had the only shot on goals.

The game’s only two other penalties came 1:53 into the second when the Stars’Jason Spezza and Flyers’ Brandon Manning went off for fighting.

Each team had good scoring chances in the first period. The Flyers struck first with 3:16 left. Nick Cousins fired a wrist shot at Niemi from the top of the right faceoff. The goalie made the save but the puck went out to Leier, who wristed it in from just outside the paint.

Dallas tied it at 4:48 of the second.Antoine Roussel shot from the left faceoff dot. Mason made the save, but the puck rebounded to Faksa in the slot and he buried a wrist shot.