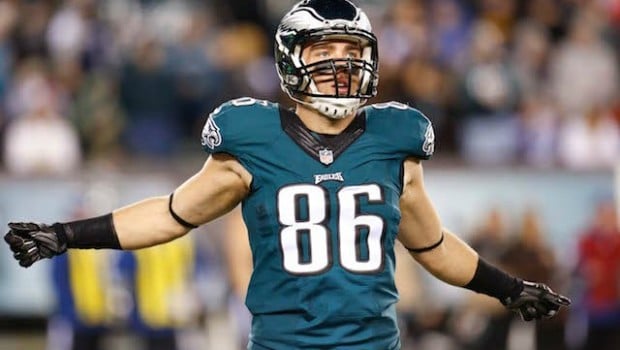 ‘NOT IN A LOT OF PAIN’ — WHEN WILL EAGLES TE ERTZ PLAY AGAIN?

Will the Eagles miss their injured tight end Zach Ertz, who missed Monday night’s game in Chicago, when they play this Sunday against the Pittsburgh Steelers at the Linc?

Ertz didn’t practice yesterday, and hasn’t since suffering a rib injury in the Eagles’ opener against the Browns.

At the time, Ertz said, he figured it was just an AC sprain. So did the team’s doctors.

Things are coming along, Ertz said, but there are still severe limitations on what he’s allowed to do. He can lift weights and do cardio exercises, both which he’s doing to keep in shape for his return.

But he’s not allowed to do anything football-related, as far as drills are concerned. It’s just waiting for the rib to heal correctly.

It’s not even a case of pain tolerance, Ertz explained.

“I’m not in a lot of pain right now,” he said. “It’s just a matter of healing. … If it was a lower rib, and the pain was what it is now, I’d easily be able to have played last week.”