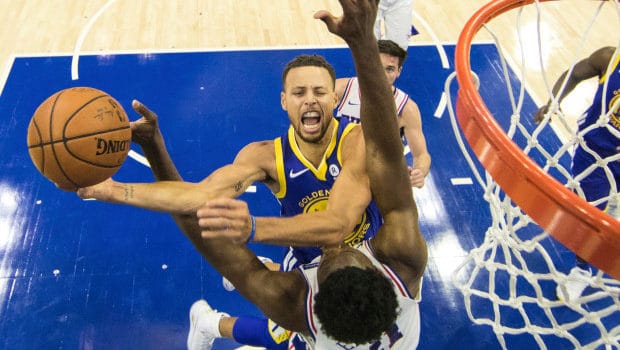 But the Warriors erased that large deficit with a furious rally in the third quarter. Curry’s 3-pointer got them within one point. He then made a pair of free throws to give Golden State a 90-89 lead.

The two-time NBA MVP hit another 3 and Draymond Green blew past a defender for a dunk to make it 99-89 going into the fourth.

Even veteran David West came off the bench and made big shots in the fourth quarter to give the Warriors distance. He finished with 14 points. Klay Thompson had 16.

Embiid was coming off a career-best performance — 46 points, 15 rebounds, seven blocks, seven assists — in a 115-109 win at the Los Angeles Lakers on Wednesday.

He seemed on his way to another monster game in the first quarter. Embiid embraced the frenzied fans and slapped hands with a guy sitting courtside after a dunk.

But the Warriors showed why they’re the best by stifling the Sixers in the second half to improve to 12-4.

Playing his first game since receiving a lucrative contract extension, Robert Covington had 20 points for Philly.

Back home for the first time following a five-game road trip to the West Coast, the Sixers showed no jet lag in the first half.

They jumped ahead 15-4 following a 3-pointer by Embiid. Covington stripped Durant and hit a 3 to make it 37-18, electrifying the crowd.

Durant’s dunk off Green’s alley-oop pass got the Warriors within 70-51 late in the second. But Embiid finished off the half with a dunk that sent the Sixers into the locker room up 74-52.