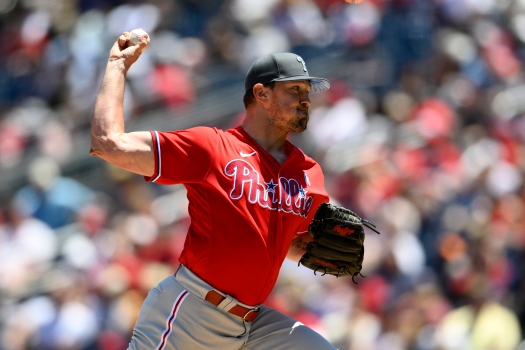 NOT EVEN THESE PHILS CAN WIN ‘EM ALL — EFLIN’S KNEE IS SORE AGAIN!

Juan Soto hit a three-run homer and the Washington Nationals beat the Phillies 9-3 to avoid a five-game sweep.

Maikel Franco’s sixth homer of the season put Washington up 8-3 in the fifth. Washington shortstop Luis García was 3 for 4.

“We had a tough week, but we have to just stay positive, keep grinding,” Franco said.

Phillies starter Zach Eflin (2-5) continued to struggle on the road. He lasted just two innings and 38 pitches, allowing four runs on five hits. He has a 7.27 ERA on the road, compared to 1.95 at home. Eflin was on a 50-pitch limit because of a bruised knee.

“He was doing a lot of running around, covering first, backing up bases,” Philadelphia manager Rob Thomson said. “Looked to me like he was a little ginger walking around. So I was just being careful, got him out early.”

Philadelphia is unsure if Eflin will make his next start.

César Hernandez doubled to score Yadiel Hernandez and boost the Nationals’ lead to 5-2 in the fourth. Nelson Cruz walked after Philadelphia intentionally walked Josh Bell to load the bases, plating another run in the fourth. Keibert Ruiz flew out to end the inning with the bases loaded.

Bryson Stott’s fourth-inning single drove in a run to cut Washington’s lead to 4-2.

Ruiz’s throwing error on a pickoff attempt to first allowed Kyle Schwarber to score from second and pull Philadelphia within 6-3.