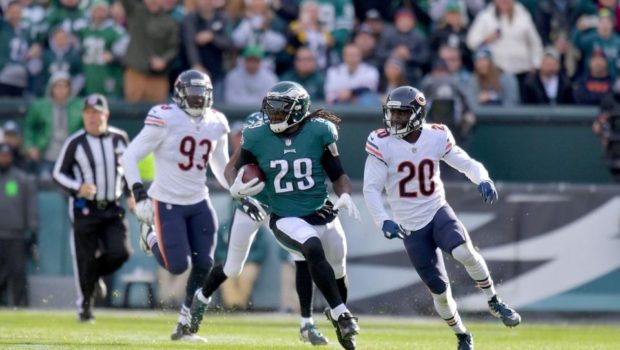 They could wrap up their first division title since 2013 if the Cowboys (5-6) lose or tie Washington on Thursday night.

Wentz had 227 yards passing, LeGarrette Blount (above) ran for 97 yards and Zach Ertz caught 10 passes for 103 yards and one TD.

The defense dominated rookie quarterback Mitchell Trubisky and the inept Bears (3-8), holding them to zero first downs in the first half and 140 total yards in the game.

Wentz threw a 17-yard TD pass to Ertz to give the Eagles a 7-0 lead on their second drive. Jay Ajayi ran 2 yards on fourth-and-1 to keep the drive going and Wentz connected with Alshon Jeffery for 14 yards on third-and-8 one play before the TD.

Wentz had a 15-yard TD pass to Nelson Agholor, who flipped over defenders into the end zone to make it 14-0 in the second quarter. Wentz spun away from a blitzer and ran 16 yards on third-and-9 to extend the drive. Then a holding penalty on Bears cornerback Prince Amukamara negated an incomplete pass on third-and-12, and the Eagles scored on the next play.

Another holding penalty on Amukamara gave the Eagles a first down late in the second quarter. Wentz then lofted an 8-yard TD pass to Jeffery to extend the lead to 24-0.

Ajayi ran 30 yards and fumbled at the Bears 5, but Agholor recovered in the end zone for a touchdown and a 31-3 lead.