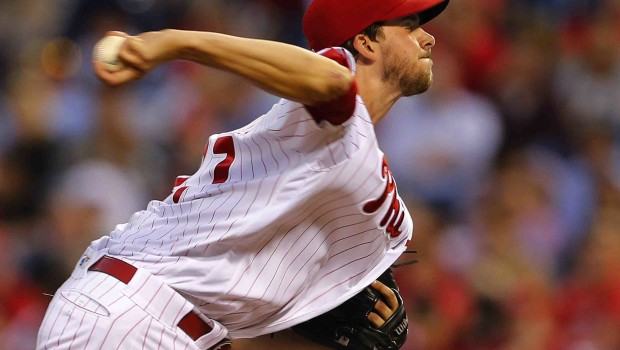 Aaron Nola got hurt by the long ball last night for the first time in more than a month.

Nola, who had not given up a home run since April 16, was taken deep by both Freddie Freeman and Nick Markakis in the Phillies’ 7-1 loss to the Braves. Nola gave up five runs (just two were earned) in seven innings, and all but one came via those long balls.

Freeman put Atlanta ahead in the third inning, when he sent the first pitch he saw over the right-field wall. Markakis, a left-handed hitter like Freeman, went the opposite way in the seventh inning as his two-run shot — Markakis’ first homer this season — broke the game open. Both blasts came on fastballs Nola left over the plate.

“Solo home runs are better [than two-run homers],” the right-hander said afterward. “That kind of hurt me, those two, two-run home runs. I made some mistakes. That ball to Freddie leaked over the plate too much, I was trying to go a little farther inside. And that ball to Markakis, I left it over the middle.”

Nola entered the game with just three homers allowed in 53 innings this season, and the last one he gave up was to Bryce Harper. He had gone 36 consecutive innings without giving up a home run before Freeman’s blast. Freeman added a second two-run shot in the ninth off Brett Oberholtzer.

Nola did strike out six batters — doing so mostly with his changeup or curveball. But the 22-year-old did not get much aid from the Phillies’ offense or defense.

The Phillies could not solve Braves starter Matt Wisler, scoring their only run in the first inning on a Ryan Howard groundout. They did not have a runner advance past second base in the final eight innings.

Third baseman Maikel Franco was charged with two errors. His first came on the first batter of the game as he could not handle a sharply hit ball off Ender Inciarte’s bat.

Franco’s second defensive gaffe was more costly. He did not field Mallex Smith’s seventh-inning grounder cleanly and threw the ball away, allowing Smith to reach second base with no outs. Smith scored when Gordon Beckham hit a blooper over a drawn-in infield, and Markakis made it a four-run game two batters later.

Franco doubled his error total for the season and nearly had a third error in the eighth inning, when he bobbled an Erick Aybar grounder. However, Franco was off the hook when Aybar was called out after a replay review.

“It was a tough moment, I want to make every play,” Franco said. “Today just happened, it’s part of the game. I’m going to try to forget it.”

Added Phillies manager Pete Mackanin: “Everybody goes through a stretch where they’re not playing their best, and Maikel is in that little lull. I think he’s letting his at-bats carry over to his defense a little bit.

“But he’s been working extra, he’s been doing everything we’re asking him to do. He just needs to get out of the funk he’s in and put together a good game or two in a row and get back on track.”