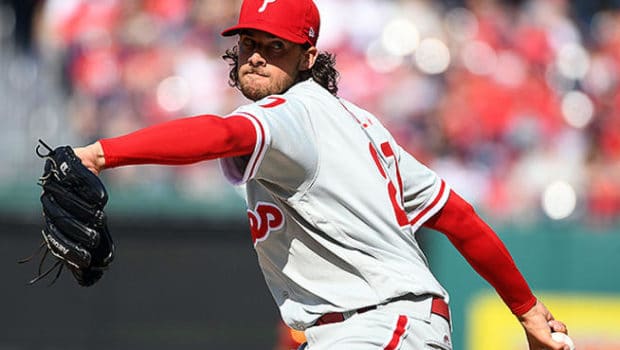 Aaron Nola gave the Phillies another reason to smile on a day that ended badly.

Despite yesterday’s 3-2 extra-inning loss to the Nationals, the 23-year-old right hander tossed five innings of one-run ball while striking out six and walking none.

“The story for me was Nola, he gave us five good innings,” manager Pete Mackanin said. “That’s two outings in a row, I think that’s gonna do a lot for his confidence.”

The former first-round draft pick is out to show this season that he’s ready to take the next step as a starter. After faltering near the end of his 2016 campaign — he went 2-5 with a 8.31 ERA over his last nine starts before a season-ending injury — Nola is 1-0 with a 3.27 ERA over his first 11 innings of work.

In his first two outings, Nola has shown off an improved repertoire, throwing with more zip on his fastball (which touched 95 mph Friday) to go along with a put-away curveball in two-strike counts.

But the next step in his development is an issue that has plagued most Phillies starters early this season: pitch efficiency. For as encouraging as Friday’s start was, Nola expressed disappointment that he left the game having thrown 90 pitches over five frames.

“My stuff felt good,” Nola said afterward. “[But] I threw too many pitches. I definitely wanna go deeper than five innings … I needed to get ahead in the counts to a few more guys. But when I did, I threw some balls over the plate with two strikes.

“Just gotta get ahead in the count. I got behind in the count a bit today and it resulted in throwing a few more pitches than I wanted to, than I needed to.”

While getting deeper into games has been difficult for Philly starters — they’ve had just three starters pitch into the sixth inning this year — their skipper conceded that he’s not trying to overextend Nola early in the season.

Time will tell if Nola will blossom into the type of rotation stalwart that the Phillies covet. But after corralling a tough Nationals lineup in his first two outings of the season, there seems to be enough signs of hope that he may turn the corner in 2017.

“I’m happy about him because I’m counting on him to be solid for us this year,” Mackanin said.