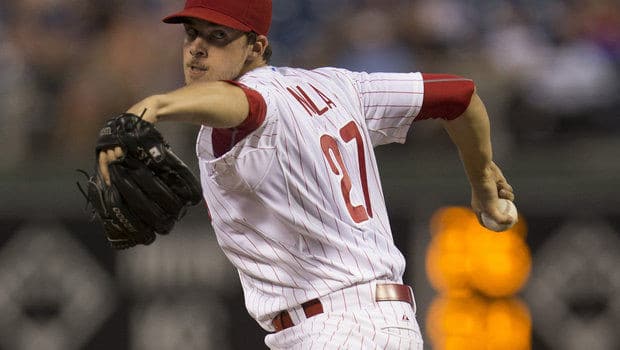 NOLA TAKES IT TO THE BANK FOR 6TH WIN, 5-0 OVER BRAVES

Don’t look now, but Aaron Nola, the Phillies’ top draft pick in 2014, has quickly become the ace of the staff.

Nola pitched seven innings and Odubel Herrera hit a three-run homer to lead the Phillies to a 5-0 victory over the Atlanta Braves Tuesday night at the Bank.

Nola (6-2) allowed six hits with a career-high seven strikeouts and one walk as the Phils snapped a five-game losing streak.

Cesar Hernandez had two hits and Brian Bogusevic had an RBI for the Phils.

A day after snapping their 12-game losing streak and 13-game road skid, Atlanta managed just seven hits against three Phillies pitchers while losing its 20th game in the last 22.

Ryan Weber (0-1) allowed two runs and four hits in six innings in his major league debut. The right-hander, who was a 22nd-round pick in the 2009 draft, started six games in 27 appearances for Triple-A Gwinnett this season and went 6-3 with a 2.21 ERA.

Ken Giles nailed down his 12th save in 15 opportunities.

The Phillies took a 1-0 lead in the fourth when Hernandez doubled, went to third on Herrera’s single and scored when Aaron Altherr grounded into a double play.

Bogusevic’s RBI single in the fifth drove in Andres Blanco, who tripled to lead off the inning, giving the Phils a 2-0 lead.

Herrera cleared the wall in right off Dan Burawa for the eighth homer of his rookie season, making it 5-0.

The Braves threatened in the third, sixth and eighth innings.

In the third, Atlanta had runners on second and third with one out, but Nola struck out Nick Markakis and got Hector Olivera to fly out to center.

With runners on first and second with one out in the sixth, Nola fanned Nick Swisher and induced Jace Peterson into an inning-ending groundout.

The Braves loaded the bases with two outs in the eighth, but Peterson hit a soft liner to short for the final out.