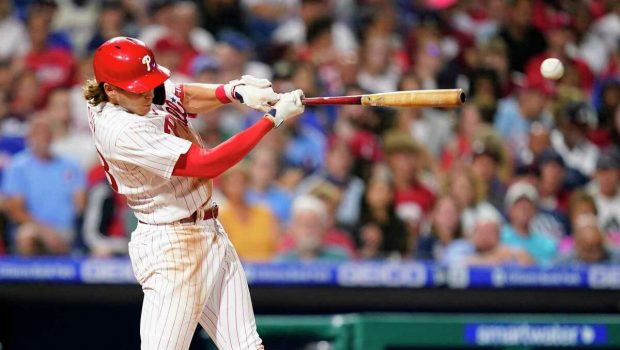 The Phillies are still only a half-game out of the wild card.

And they have developed a formula for winning games.

And hope the pop-gun offense (until Jean Segura and Bryce Harper come back) keeps it close until the great bullpen takes over.

Then there was last night.

Kyle Schwarber’s NL-leading 31st homer in the sixth inning got the Phillies on the board while J.T. Realmuto hit a two-run homer off reliever Will Smith in the ninth inning to make things interesting.

Kenley Jansen came on and got two outs for his 23rd save.

Alec Bohm had two hits for the Phillies, who have lost four of five games at home since the All-Star break.

“Strider had good stuff and threw strikes,” Phillies interim manager Rob Thomson said. “He kept us off-balance with the slider. He’s got a good arm.”

Riley got the Braves scoring started in the first inning off starter Aaron Nola (6-8), drilling a double to left center that scored Swanson. Harris led off the third with a solo homer to right, and Olson connected for a two-run homer in the fifth.

Four of the seven Braves hits off Nola went for extra bases. In his two starts against Atlanta this season leading into Tuesday night, the right-hander allowed just three extra-base hits combined in two wins.

Aaron Nola — one of the Phils two aces along with Zack Wheeler — was making his first start in nine days due to the All-Star break. Thomson said the Phillies wanted to give him some extra rest. Instead, there was early rust that allowed Atlanta to take advantage of some early mistakes.

“I was just out of whack,” Nola said. “A lot of my fastballs were running over the middle of the plate. Just not great pitches.”

Strider worked the corners well, inducing eight fly-ball outs that often were weakly hit by a Philadelphia lineup that has struggled to get any consistency. It was sharper than his four-inning, five-earned run performance in his last start July 17 at Washington.

“My game isn’t about contact, but getting ahead and forcing them to catch up,” Strider said. “We got a lot of fly-ball outs and that’s a result of the fastball and getting ahead.”

Schwarber’s home run — a line drive that streaked over the wall in deep left-center feld — was the only sign of vulnerability by Strider, who struck out six and walked one.