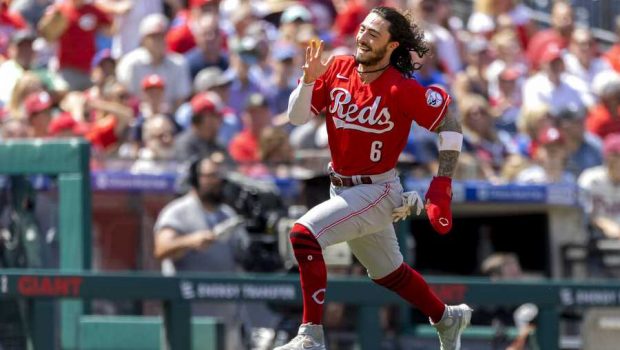 Once again the Phils handed the starting pitching to Aaron Nola.

And once again he dropped it.

Which is another way to say that he was woeful.

And as a result the Phils fell out of first place and head to Arizona behind the Braves in NL East.

India, one of the leading candidates for NL Rookie of the Year, drove Nola’s third pitch deep to left-center for his 15th homer. He also singled and scored on Shogo Akiyama’s two-run double in the third and singled and scored again on Tyler Naquin’s bases-loaded walk in the fifth.

Bryce Harper drove in two runs and walked three times for Philadelphia, which lost for the fourth time in six games. Odubel Herrera had three hits.

Lucas Sims (5-2) pitched 1 1/3 scoreless innings for the win, and Mychal Givens got four outs for his third save.

Nola (7-7) was charged with four runs and six hits in 4 1/3 innings. He struck out four and walked three.

Cincinnati had a chance to blow the game open in the fourth, but Nola escaped a bases-loaded, no-out jam thanks to a stellar diving stop by shortstop Didi Gregorius that led to an inning-ending double play.

Harper’s base-loaded walk and Gregorius’ sacrifice fly got the Phillies within one in the fifth. But the Reds put it away with three in the eighth.