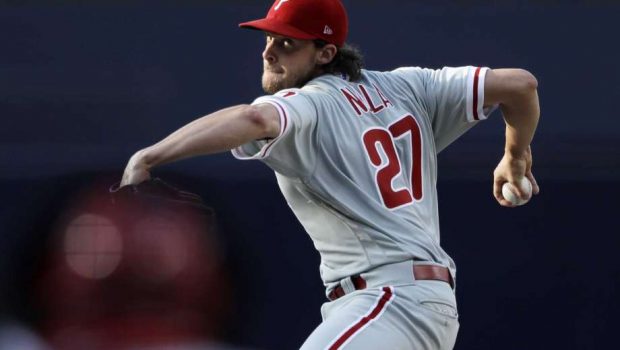 NOLA SHOWS FLASHES OF HIS ACE STATUS IN PHILS’ WIN

It wasn’t a lights-out start for Phils ace Aaron Nola, but given how he has struggled in the first month of the season, he’ll take it!

He worked his way out of a bases-loaded jam in the third with a pair of strikeouts, and two more jams in the fourth and fifth innings to preserve the Phils’ 4-3 lead before giving way to the bullpen.

While he gave up three runs on nine hits overall, including two home runs (one of which was an inside-the-park homer to Raimel Tapia), Nola struck out nine and walked one.

He resembled his old self.

“I turned things around mentally when I struck out [Tapia and Garrett Hampson] to strand the bases loaded in the third,” Nola said. “I just had to slow my mind down. Slow the game down. There’s no other way to do it besides slowing it down.”

“I’d like to start with Nola today,” Kapler said to reporters before any postgame questions were asked. “I just went and watched the at-bats from the fifth inning. … He dotted fastballs inside and right on the black. That was as good as we’ve seen Nola this season. I actually think his stuff was spinning more from the dugout, it had more life from the dugout, and in this air, it wasn’t even moving as much as we think it will going forward.”