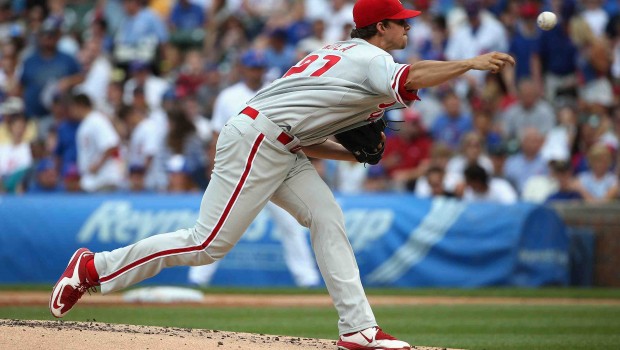 CAN NOLA STOP PHILLIES’ MINI-SLIDE THIS AFTERNOON AGAINST TIGERS?

The Phillies have dropped the first two games of their series in Detroit, which has led lots of fans to worry that this is the slide most expected for the surprisingly resilient Phils.

The Tigers hope Anabel Sanchez can preserve the bullpen as they look to complete a three-game sweep of the visiting Phillies this afternoon.

The Phils (25-21) have gotten off to one of the most unexpectedly solid starts in baseball after losing 99 games last season. But they have dropped four of their last five while scoring just 11 runs. In last night’s 3-1 loss, they finished with only five hits and got their only run on Tommy Joseph’s sacrifice fly in the ninth.

Carlos Ruiz went hitless and is 0 for 14 over his last four.

Aaron Nola (3-3, 2.85 ERA) had been pitching extremely well before giving up five runs – two earned – and seven hits in seven innings of a 7-1 loss to Atlanta on Friday. He allowed a pair of two-run homers after giving up three home runs in his first 53 innings and hadn’t surrendered one since April 16.

The right-hander had gone 3-0 with a 1.32 ERA over his previous five starts, all wins.

“Solo home runs are better (than two-run homers),” Nola said after the defense committed two errors behind him. “That kind of hurt me, those two, two-run home runs. I made some mistakes.”

Nola has gone seven innings in seven of his nine starts, though, something the Tigers (23-22) wish Sanchez could boast. Sanchez (3-5, 6.23) has pitched fewer than six innings in six of his nine outings, including Friday when he allowed five runs in five innings of a 7-5 loss to Tampa Bay.

The right-hander has allowed at least four runs in each of his last four starts.

”If our starters can’t go more than five innings, it is going to wreck our bullpen,” manager Brad Ausmus said.

Slow starts have plagued Sanchez. Opponents have an .864 OPS in the second time through the batting order against him, and he allowed a homer on his second pitch against the Rays, who scored three in the first inning.

”I know everything is coming out good, and it isn’t mental,” Sanchez said. ”In the first inning, I give up a ground ball on the line and a ground-ball infield single and they get two runs. In the sixth, base hit, walk and runs. What can I do?”

Sanchez will be making his first start against the Phillies since 2012 as Detroit goes for a fifth straight victory. It won for the eighth time in nine tries Tuesday despite Ian Kinsler having to sit out because of flu-like symptoms.