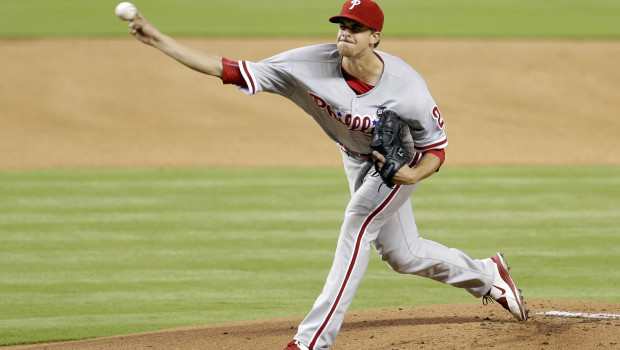 Aaron Nola got a no-decision in the Phillies’ 2-1 loss to the Washington Nationals in 12 innings yesterday at Nationals Park,

Nola allowed six hits and struck out five in five scoreless innings. He could have pitched longer, but the Phillies are trying to limit his workload.

A few weeks ago, the Phillies said they planned to limit Nola to about 185 innings this season, which includes the 109 1/3 innings he pitched in the minors. Nola has 187 to this point, with the potential for one more start Friday against the Marlins at Citizens Bank Park. Manager Pete Mackanin said the Phillies will make that decision Sunday.

“I feel good,” Nola, who threw 67 pitches, told MLB.com. “I want to go one more. I want to finish out the season, and try to finish it out strong.”

Nola showed something in the fourth inning when he allowed singles to Bryce Harper, Jayson Werth and Clint Robinson to load the bases with no outs. He struck out Ian Desmond looking on a 93-mph fastball for the first out. Nola fell behind Demond 2-0, but he came back with a pair of curveballs for strikes.

Nola got Matt den Dekker to line out to Phillies second baseman Andres Blanco, and he got Wilson Ramos to ground out to third baseman Cody Asche to end the inning.

“He’s a cool customer,” Mackanin said about Nola. “He has great confidence. He’s pitching like a major league pitcher. He shows no fear and he locates his pitches well. That’s a sign of a great pitcher: when you get in trouble and can minimize the damage.”

Nola reflected on his performance: “It definitely helps to experience something like that. I’ve been in situations in like that before, and had success like tonight [and] got hurt in the past. I kind of know what both ways feels like. The main focus right there is to stay calm and don’t over think things, and make good pitches when you need to.

Whether they lose 100 games is inconsequential at this point. The Phillies are almost certain to finish the season with the worst record in baseball. The team just wants to see good signs from enough players that they have reasons to be optimistic about the future.

Nola has been one of those good signs. Phillies fans might get a chance to see him one last time Friday — if the coaching staff thinks it will not hurt him in the long run. Nola certainly would love the opportunity.