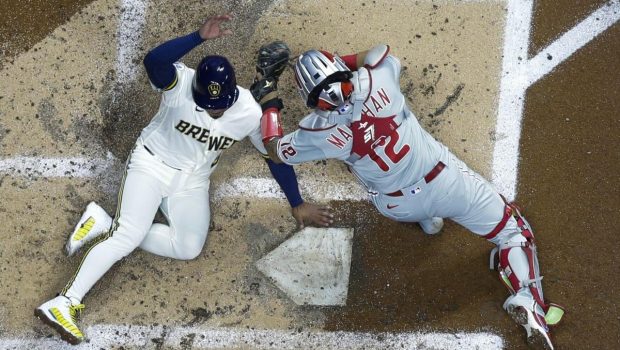 Aaron Nola had another chance to resurrect his wretched season last night against the Brewers in Milwaukee.

But the 2018 third-place finisher for the Cy Young came up short again.

Aaron Nola (7-8) gave up three runs and six hits in five innings while striking out six and walking none.

Those three runs came in a third-inning rally that featured five hits, which all came on two-strike pitches.

“This whole season, it’s for the most part one inning that’s erupted on me,” Nola said. “I thought I made some OK pitches that inning. They just found holes.”

As a result, the Phils fell 2 1/2 games behind the NL East-leading Atlanta Braves, who beat the Washington Nationals 8-5.

Eric Lauer allowed four hits in seven innings to lead the Brewers to a 10-0 victory.

The Phillies had won all five of their previous games with the Brewers this season, including a four-game sweep in Philly in May and a 12-0 blowout in Milwaukee on Monday.

But they couldn’t do much of anything against Lauer.

He was pitching so well that the Brewers let him hit for himself with the bases loaded and two outs in a 3-0 game in the sixth inning. Lauer rewarded the team’s faith in him by drawing a walk to spark a three-run rally. He also singled and scored in the third.“He’s done a great job,” Yelich said. “Every time he takes the ball, we feel we have a chance to win. He’s stepped up in some big bounce-back games for us like he did today.”

Milwaukee broke the game open by scoring seven runs against the Phils bullpen. The Brewers scored three in the sixth off Ramón Rosso. García hit his two-run homer in the seventh off Cam Bedrosian. Milwaukee added two more runs in the eighth against Enyel De Los Santos

That was more than enough for Lauer.