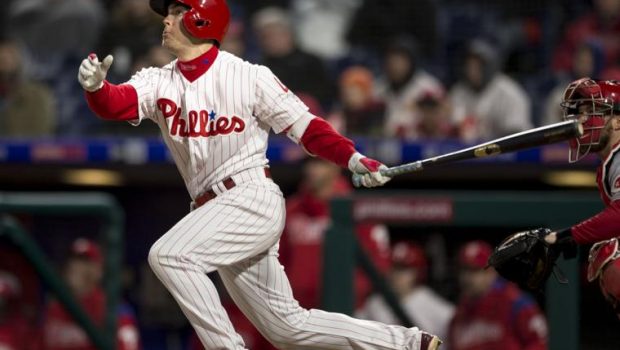 For Phillies ace Aaron Nola, what a difference a week makes!

In the season opener last week, Nola was lofted prematurely, after tossing 68 pitches with a 5-0 lead.

Eight tight innings and Scott Kingery (above) hit a grand slam, leading the Phillies to a 6-1 victory over the visiting Cincinnati Reds.

Nola (1-0) gave up three hits while striking out six and walking three as Philadelphia won for the fourth time in five games. The Reds have lost three in a row.

Nola threw 103 pitches, two starts after rookie manager Gabe Kapler’s disputed decision to lift the Phillies ace through 68 pitches with a lead in a season-opening loss at Atlanta. The right-hander improved to 9-3 with a 2.04 ERA in his last 12 home starts.

“He just looked so good out there,” Kapler said. “This is the time we’re going to ride him.”

“Just keep focusing on command and attack to get early outs,” Nola said.

The Phillies got some insurance in the eighth when Kingery connected with one out off Tanner Rainey, who was making his big league debut. It was the second career homer for Kingery — he helped the Phillies beat the Reds 6-5 on Monday night by going deep.

Reds starter Homer Bailey didn’t allow a hit through 5 1/3 innings and pitched through the sixth, giving up one run on two hits with seven strikeouts and no walks.

“Homer did a spectacular job,” Reds manager Bryan Price said. “That’s a big step for him.”

Cesar Hernandez broke up Bailey’s no-hit bid with a solid single to right. Hernandez stole second and scored when Odubel Herrera hit the first of his two doubles.

J.P. Crawford put the Phillies ahead 2-1 in the seventh when he singled off Jared Hughes (0-1). Crawford got a hit for just the second time in 26 at-bats this season and drove in Nick Williams, who led off with a double.

The Reds got on the board first in the fifth when Billy Hamilton drew his second two-out walk of the game, stole second base for the second time and scored on Jesse Winker’s single.