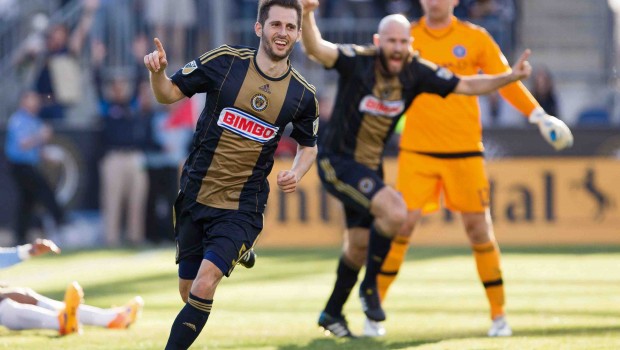 Vincent Nogueira scored in stoppage time and the Union beat New York City FC 2-1 on Saturday for the Union’s first victory of the season.

NYC goalkeeper Josh Saunders collided with Conor Casey inside the 6-yard box defending a cross and Nogueira toe-punched it home in the 92nd minute.

Philly (1-3-2) snapped a three-game losing streak in the first of two games over the next five days between the clubs.

Zach Pfeffer started the scoring in the 27th minute for Philly. Sebastien Le Toux beat his defender, dribbled to the baseline and fed it across to Pfeffer.

David Villa tied it in the 55th minute for NYC FC (1-2-2). Four NYC FC players touched the ball at the top of the penalty box, goalkeeper John McCarthy came out to defend a shot and Villa walked the rebound into an empty net.

McCarthy made his MLS debut for Philly.