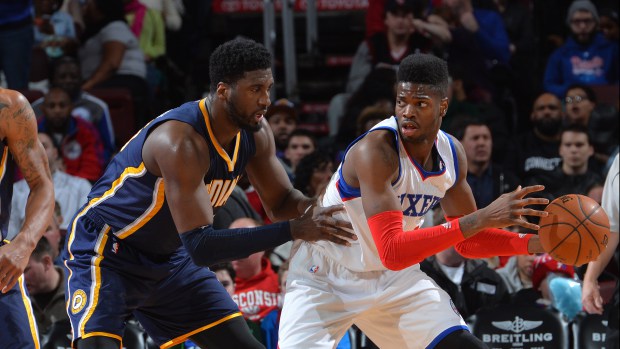 It was the day after the trade, and many people didn’t know what to expect last night at the Wells as the Sixers played the Indiana Pacers.

But for Sixers fans who were worried about the future without Michael Carter-Williams, rookie Nerlens Noel gave them a taste.

Noel finished just shy of a triple-double with 12 points, nine rebounds and a career-high nine blocks. Five of Noel’s blocks came in the first quarter, which matched a Wells Fargo Center record for most in a period. His nine total blocks also were an arena record.

Luc Mbah a Moute and Jerami Grant led the Sixers with 16 points apiece.

The Sixers had a much different look than 11 days ago when they played their previous game.

McGee, an oft-injured center who was traded by the Nuggets so they could unload salary, played 11 minutes and scored his only two points on a huge, one-handed dunk in the fourth quarter.

Canaan wasn’t available, leaving Tim Frazier — who was signed to his second 10-day contract earlier in the day — to run the point. Frazier finished with 13 points and seven assists. In perhaps the most surprising lineup move, 34-year-old guard Jason Richardson (left) logged his first NBA minutes in more than two years. The 13-year NBA veteran, who had been on the mend from serious knee surgery to repair a hole in his cartilage, started in Philly’s depleted backcourt and had seven points and seven rebounds in 18 minutes.

Stuckey took over in the second half, going on a personal 10-0 run to push the Pacers to an 85-61 lead with 2 minutes left in the third quarter. The Sixers made a small fourth-quarter charge but never sliced Indiana’s lead to single digits.