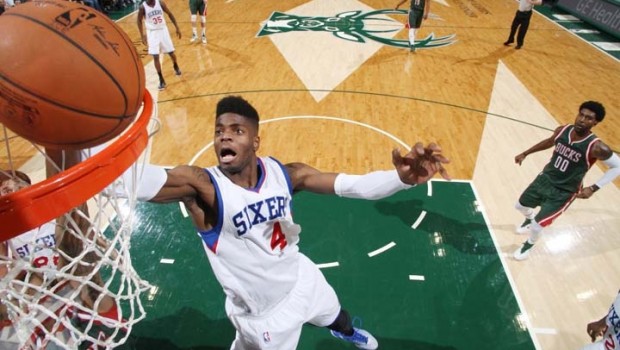 Yes, for the second straight game the Sixers allowed a close game to slip away from them in the fourth quarter, as they fell to the Bucks 93-81 at the BMO Harris Bradley Center on Friday night.

But the big story last night in Wisconsin was the first meeting between the Sixers’ prize rookie, Nerlens Noel, and the Bucks’ rookie Jabari Parker.

Once members of the same high school class before Noel reclassified in 2012, the two will fight for NBA Rookie of the Year honors.

Noel finished with 14 points on 7-of-11 shooting to go along with 10 rebounds, two assists, three blocks, and a steal. In doing so, he became the first Sixers rookie since Jerry Stackhouse (1995) to reach 14 points, 10 rebounds, and three blocks in a game. Additionally, after pulling down 10 boards and swatting three shots in each of his first two outings, he joined Shaquille O’Neal, Dikembe Mutombo, and David Robinson as the only players since 1985 to accomplish that feat.

“I stayed within myself and looked to take better shots,” Noel said when asked about bouncing back from a 2-for-11 performance from the floor in his debut against the Pacers on Wednesday. “My guards found me, and Henry [Sims] as well, and I [picked] my spots.”

Parker put together a double-double performance in his home debut with Milwaukee, scoring 11 points on 5-of-11 shooting and notching 10 rebounds in front of a sellout crowd.

“We give them credit, they played good defense, but we missed a lot of shots,” said head coach Brett Brown after the game. “I thought our guys played their hearts out, but they just couldn’t score.”

Philly missed its last 14 field goals and failed to get to the free-throw line a single time in the fourth quarter.