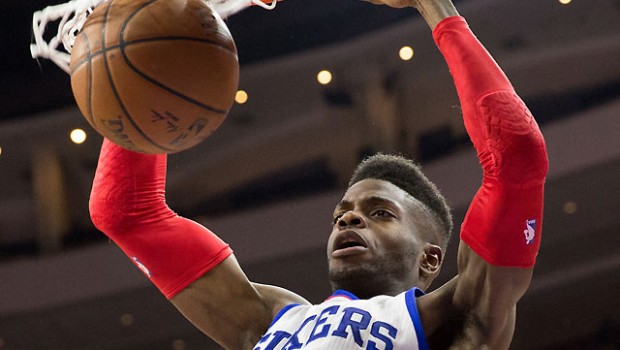 NOEL RETURNS WITH 15 POINTS IN 19 MINUTES IN SIXERS LOSS

Kelly Oubre Jr. and Marcin Gortat scored 16 points each and John Wall had 14 assists as the Washington Wizards cruised to a 127-118 preseason victory over the Sixers Friday night at the Wells.

But it wasn’t that close.

DeJuan Blair had 15 points, and Otto Porter and Brandon Beal added 13 each for the Wizards.

Scottie Wilbekin scored 21 points for the 76ers, who cut a 28-point deficit to five in the fourth quarter, but could get no closer.

The Wizards made their first eight shots and finished the first quarter shooting 84 percent. Washington led 69-45 at halftime and 99-71 after three quarters.

Sixers coach Brett Brown had just 11 of his 20 players available.

No. 3 overall draft pick Jahlil Okafor did not play for the second straight game because of knee soreness and undrafted rookie Christian Wood was out with a sore hamstring. Isaiah Canaan and JaKarr Sampson were given the night off to rest and previously injured players, Tony Wroten, Kendall Marshall, Carl Landry, Nik Stauskas and Joel Embiid did not dress for the game.

After playing together in the first two preseason games, Noel and Okafor were apart for the fourth straight game. Noel returned after missing the two previous games and Okafor missed his second straight on Friday night.

In splitting his time between power forward and center, Noel scored 15 points in 19 minutes.