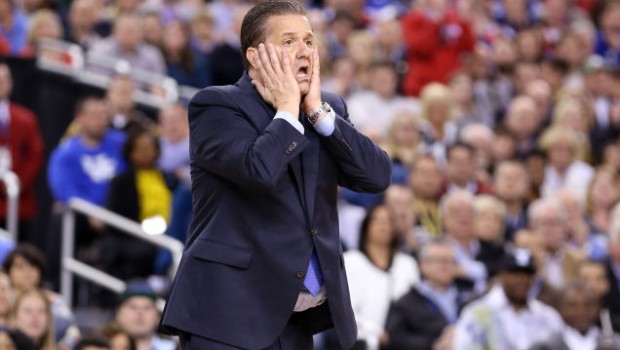 The unbeatable behemoth is no longer unbeaten.

No. 1 Kentucky, considered by some talented enough to compete with NBA teams, wasn’t good enough to take down a Wisconsin team that continues to prove it possesses remarkable toughness to match its talent.

Led by two huge plays by junior forward Sam Dekker, UW overcame a four-point deficit in the final 4 1/2 minutes to hand Kentucky its first loss of the season, 71-64, in the national semifinals Saturday night at Lucas Oil Stadium.

Who still doesn’t believe in this team? “It’s a great story,” UW senior Frank Kaminsky (blocking a shot at left) said before the game. “To talk about last year when we played them and the way we lost, then to come back and beat them on the same stage would be a storybook ending almost.

“But our goal is to win a national championship.”

The Blue Devils, who advanced to their ninth title game under Mike Krzyzewski with an 81-61 victory over Michigan State, shot 65.2% in an 80-70 victory over UW on Dec. 3 at the Kohl Center.

Duke is 4-4 in the title game under Krzyzewski.

Kaminsky, who was limited to eight points and seven field-goal attempts in the one-point loss last season to Kentucky, scored nine in the first half Saturday. He appeared to be limping as he walked off the court at halftime but scored 11 in the second half to finish with a game-high 20.

Dekker, averaging 21.8 points in the tournament, added 16. He broke a 60-60 tie with a dagger three-pointer with 1 minute 41 seconds left and then drew a charge 16 seconds later.

Unlike the first semifinal between Duke and Michigan State, the UW-Kentucky matchup was taught and entertaining.

The teams battled for 20 minutes and went to their respective locker rooms tied at 36-36.

Kentucky’s biggest lead was five points — 5-0 — in the first minute.

Led by Andrew Harrison, the Wildcats battled back and took the lead back at 36-34 on a breakaway by freshman forward Trey Lyles with 32 seconds left.

Koening answered for UW with a jumper with 1.7 seconds left in the half, over 6-foot-9 forward Marcus Lee.

Andrew Harrison, who entered the night shooting 37.5% and averaging 9.2 points per game, scored 11 in the first half to lead the Wildcats. He had six of those points after UW built its lead to 23-14.

UW opened the second half as it did against Arizona in the Elite Eight — sizzling.

A charging call against Josh Gasser on a pass wiped out a three-pointer by Koenig.

That led to a drive by Aaron Harrison for a 58-56 Kentucky lead.

After Kaminsky missed the first of bonus free throws, Towns grabbed two offensive rebounds to keep the possession alive and then scored inside over Kaminsky for a 60-56 lead with 6:35 left.

UW went without a point after Traevon Jackson hit two free throws with 10:34 left until Dekker scored inside with 4:26 left to pull UW within two.

After a shot-clock violation by Kentucky with 3:16 left, UW got a basket from Hayes, who followed his miss and just beat the shot-clock.

After Kentucky failed to score, Dekker buried a three-pointer with 1:41 left and then drew a charge with 1:25 left.

Aaron Harrison scored with 56.2 seconds left and was fouled by Kaminsky. He made the free throw to pull Kentucky within one.

Kaminsky was fouled with 24.5 seconds left and went to the line for two. He made both for a three-point lead.

Kaminsky fouled Towns with 16.1 seconds left. Towns made just 1 of 2 and Kaminsky grabbed the rebound.

Koenig was fouled with 12.2 seconds left and got two shots. He buried the first and the second for a four-point lead.

UW took the ball and Koenig was fouled with 5.5 seconds left.

Koenig made just 1 of 2 but the Wildcats turned the ball over in the in-bounds with 4.7 seconds left.

The Wildcats’ perfect season was slipping away.

Kaminsky hit two free throws with 4.4 seconds left and the game was over.

UW is now one victory away from a national title. That didn’t appear to be likely when Ryan was hired before the 2001-’02 season.

During his introductory news conference, Ryan was asked what he expected to achieve as UW’s head coach.

His response: “Compete for the upper half of the Big Ten every year, finish towards the top, have a chance for a conference championship, and have a chance to play in the NCAA tournament every year.”