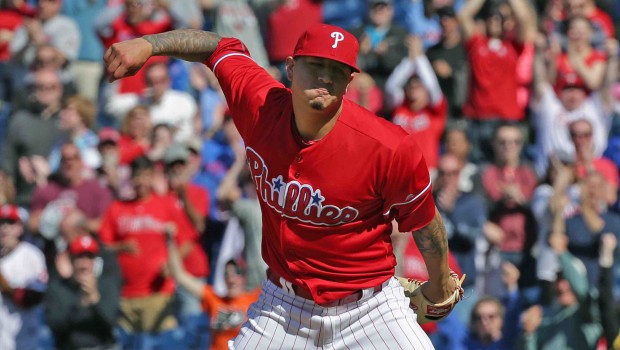 I know it’s only spring training but, but in yesterday’s 2-2 tie between the Phillies and Orioles:

The Phillies didn’t allow a hit through 8 1/3 innings, when Phillies right-hander Michael Mariot gave up a single to Chris Dickerson and a two-run home run to Sean Coyle.

Vince Velasquez (above) pitched 3 2/3 hitless innings, walking four and striking out six. Jake Thompson followed with 2 1/3 perfect innings with two strikeouts. Colton Murray walked one batter in 1 2/3 innings and Mariot retired the last batter of the eighth and one batter in the ninth before losing the no-no.

The last Phillies no-hitter in spring training came on April 4, 1952, when Steve Ridzik threw one against the Cardinals in Savannah, Ga. Ridzik never pitched in the big leagues.

“I had [more] deep counts than I’d like, and I was trying to trust my stuff and stay down in the zone,” Lee said.

The Phillies scored on Ryan Hanigan’s RBI single in the fourth and Andrew Knapp’s home run in the sixth, his first of the spring.