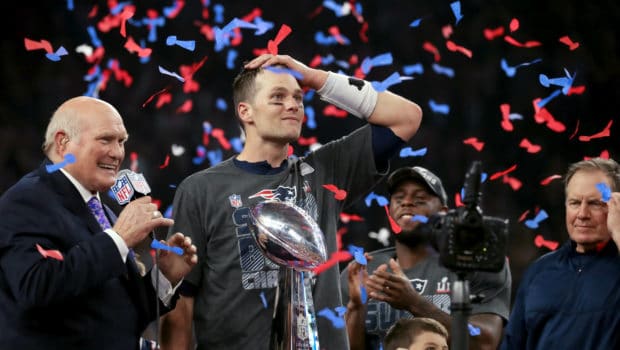 NOBODY DOES IT BETTER! BRADY AND PATS DRIVE FOR 5 IN 34-28 SUPE COMEBACK WIN OVER FALCONS!

In each of his previous four Super Bowl victories, Tom Brady guided game-winning drives for the New England Patriots.

But nothing he had ever done measures up to last night!

Brady put the Pats on his back and stunned the Atlanta Falcons in a Super Bowl comeback like no other.

James White sneaked into the end zone from 2 yards away, completing a 34-28 victory.

They won because of Dont’a Hightower’s critical strip-sack and Julian Edelman’s Velcro hands and the clock management and coaching of a maestro, Bill Belichick, but mostly because of a truism that has beleaguered the league’s other 31 teams for 16 years running: the Patriots have Brady, and no one else does, not even the Falcons, who boasted the N.F.L.’s most valuable player in Matt Ryan.

Not including their 3-second possession at the end of regulation, the Patriots, after mustering only a field goal on their first seven drives, scored on their final five possessions.

“At halftime, I would say we weren’t down at all,” Brady said. “We were disappointed in the way we played, and we knew that we could go out and do a lot better in the second half.”

Brady completed 43 of 62 passes for 466 yards, with two touchdowns and an interception, a performance that earned him Super Bowl M.V.P. honors for the fourth time in his career. In none of the other three instances did he handle a season as challenging as this, from the illness plaguing his mother, Galynn, to the four-game suspension served for his role in that protracted saga known as Deflategate, after the underinflated footballs meant to give him a throwing advantage.

In accepting the Vince Lombardi Trophy from Commissioner Roger Goodell, who meted out the punishment, the owner Robert K. Kraft did not outright address the scandal. But he did allude it to it in perhaps the strongest possible terms.

“A lot has transpired in the last two years, and I don’t think that needs any explanation,” Kraft said.

Because of that, he said, this title is “unequivocally the sweetest.”

His reputation sullied, Brady embarked on a nationwide tour of vindication that reached its climax in the venue where he won his second Super Bowl, back in February 2004, long before the Patriots achieved modern dynasty status in an era designed to encourage parity.

Brady was 26 then, and it is possible that he is now superior in all facets, six months shy of his 40th birthday, at an age when most of his peers have either retired or entered a noticeable decline. By going 3-1 during his suspension, the Patriots created the farcical perception that they no longer needed him — that quarterbacks in New England’s ruthless machinery are interchangeable, even Brady.

He turbocharged the Patriots’ offense with 33 touchdowns to four interceptions heading into Sunday, when he toiled, misfiring wide and long, until late in the third quarter.

Powered by three touchdowns in a 9:54 span of the second quarter, Atlanta led by 28-9 with 10 minutes left before the Patriots unleashed 10 minutes of mayhem.

Hightower’s strip-sack started the comeback, with Brady capitalizing on excellent field position to find Danny Amendola from 6 yards out. Less than 6 minutes remained, and though the Falcons advanced deep into New England territory, a holding penalty knocked them out of field-goal range, forcing them to punt.

But first, Brady had to contend with a defense overseen by the Falcons’ coach, Dan Quinn, who nearly foiled him two years ago, when he worked in Seattle. For all of Belichick’s experience, Quinn had coached in more Super Bowls recently, three in the last four seasons.

The memory of that loss to New England still smolders for Quinn, who from that game remembers not the game-saving goal-line interception by Malcolm Butler, but how the Seahawks went ahead to stay with about two minutes left. Quinn may never again coach a defense as fast and physical — words emblazoned on a bracelet he has worn — as Seattle’s, but for the first three quarters on Sunday, the Falcons harassed Brady, swarmed the ball and created turnovers, converting both of New England’s mistakes before halftime into 14 points.

Most obvious was the Falcons’ speed advantage, and how, as Quinn’s Seahawks did against Denver in the 2014 game, they parlayed it into momentum. Robert Alford’s 82-yard interception return for a touchdown, the second-longest return in a Super Bowl, had the same effect on the Patriots as Malcolm Smith’s for Seattle three years ago.

And that, to an extent, was part of the plan Quinn toted along with him to Atlanta, whose ascension under him began with an evolved way of thinking forged by his time in Seattle: He wanted his players to work as hard as they ever have — but have a great time doing it. The Super Bowl was enjoyable, until it wasn’t.

“That’s a hard one in the locker room,” Quinn said. “No place to put that one mentally for us.”

Belichick built this reputation by twice smothering prolific offenses in Super Bowls — the 1990 Bills, when he coordinated the Giants’ unit, and the 2001 Rams, in the championship that launched New England’s dynasty.

As potent as that Rams team was, it actually averaged fewer points and fewer yards per play during the season, and committed 33 more turnovers, than these Falcons. Scoring 80 points across two playoff victories emboldened Atlanta running back Devonta Freeman to call the Falcons’ offense “unstoppable.”

Except that the Patriots did, in fact, stop Atlanta on all four fourth-quarter possessions, empowering Brady with two timeouts and 3:30 left, chasing an 8-point deficit. They marched 91 yards on a drive extended by a reception by Edelman as absurd as the comeback itself, one that evoked so many catches of past New England Super Bowls.

Only this time, instead of watching opponents do the impossible — David Tyree hugging the ball against his helmet or Mario Manningham tiptoeing along the sideline or Jermaine Kearse contorting himself — it was the Patriots who amazed. While falling, Edelman caught a tipped pass, then dropped it, then cradled the ball just before it would have touched the ground.

“It was one of the greatest catches I’ve ever seen,” Brady said. “I don’t know how the hell he caught it. I mean, I don’t think anybody — I don’t think he does.”

It only mattered that he did, and after White scored with 57 seconds left and Danny Amendola converted the tying 2-point conversion, the Patriots called heads, won the coin toss and never let Atlanta touch the ball again.

The anxiety, anger and exasperation that pervaded New England for months, after the scandal that cost the Patriots their sainted quarterback for a spell and dented their reputation — none of it mattered.