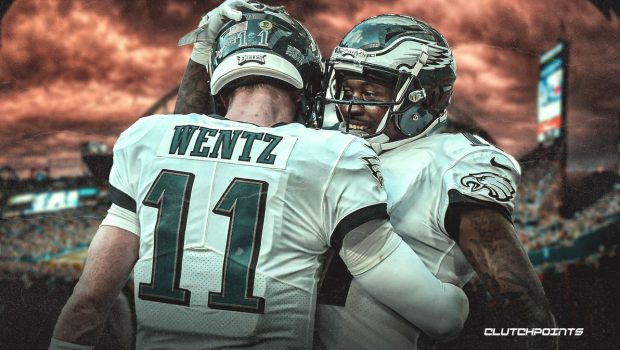 Eagles big boss Howie Roseman appeared yesterday on WIP and swore there was nothing to the rumors of a rift between quarterback Carson Wentz and wide receiver Alshon Jeffery:

“There’s no issue with Carson and Alshon. There’s no issue, and they’ll tell you that. I think from our perspective, Alshon has to get healthy. When he’s healthy, he’s a good player, but he’s gotta get healthy, and that’s the first order of business, for him to get healthy. I think the narrative about Alshon as a player – and I just hear this, (Eagles Director of Public Relations) Brett (Strohsacker) does a great job of keeping me up to date – isn’t really fair. This is a guy who has been a really good player for us, it’s not a guy who is tremendously old, so we gotta get him healthy and get him right, and then go from there.”

During the 2019 season, there were reports that Jeffery and Wentz didn’t really see eye-to-eye. Then, not too long ago, it was reported that Jeffery would welcome a trade out of Philly this offseason.

Provided that, people are curious if the Eagles and Jeffery can coexist in the future. For the most part, fans believe it would be best that Jeffery is sent elsewhere. On the contrary, Roseman holds the opinion that there are no issues between Wentz and the veteran wideout.

Roseman believes that Jeffery has been dealt an unfortunate hand with injuries. In addition, Roseman thinks that Jeffery can return to being a key contributor for the Eagles once he gets healthy again.