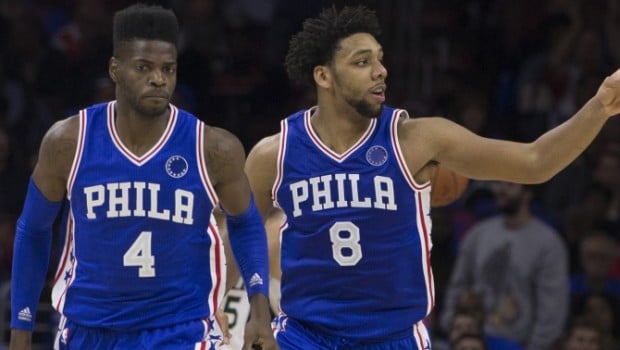 NO WAY THE SIXERS TRADE NERLENS NOEL OR JAHLIL OKAFOR!

The NBA trade deadline is Thursday, Feb. 18 at 3 p.m., and there is buzz in the local lame-ass media that the Sixers will trade either Nerlens Noel or Jahlil Okafor.

Get the hell out of here, and shut up!

Good things happen when Noel and Okafor play with an average point guard like Ish Smith. There is not enough of a body of work on either player to put them on the open market. With a talent upgrade this summer, both players’ value will only increase.

WORTH TALKING ABOUT
Oklahoma City and Miami first-round picks
Both picks are currently projected to be the 20s with the Miami pick holding the best value at No. 21. There is a strong market to move one of these picks, especially because a number of teams are without a first-round pick in June. Factor in a below-average draft, and if the Sixers can bring back an established player in a deal, then they should look into it.

Rest of the Team
Philly is not under the gun to move any of its bench pieces but should listen if something makes sense. Small forward Robert Covington has the most appeal with his contract and play on the court.

Could this be the deadline when Philly acquires talent instead of just assets?

Although no trade pushes the Sixers to front of the line, a move to obtain a quality starting point guard could be the first step going into the offseason.

Elton Brand
Because Brand was signed in early January, he cannot be traded. League rules state that a player who signs a contract after Sept. 15 cannot be traded for six months.

Ish Smith
Because Smith was acquired from New Orleans on Dec. 24 he is ineligible to be aggregated in any trade. There is a two-month waiting period for players obtained in trades. Smith, however, can be traded alone.

The Sixers also own the draft rights to former lottery selection Dario Saric as well as Joel Embiid, who has been sidelined his first two years with an injury.

Philly has its own first-round pick, projected to be in the top three.

The Lakers will send the 76ers a first-round pick, if it falls outside of the top three of the lottery.

For taking on JaVale McGee’s money, the Sixers have Oklahoma City’s first-round pick, projected to be in the late 20s. The Thunder had traded this pick to Cleveland in the Dion Waiters deal. Denver obtained it when it traded Timofey Mozgovto the Cavaliers.

As part of facilitating the Kevin Love trade to Cleveland, the 76ers have the Heat’s first-round pick, protected Nos. 1-10. Cleveland obtained this pick in the LeBron James trade to Miami in 2010. It is likely that this pick will change hands at the end of the season.

Philly will have swap rights with Sacramento. This would occur only if Chicago does not receive a pick in the 11-30 range from Sacramento.

Although unlikely to happen, the Sixers will have the right to swap the first-round pick of Miami or Oklahoma City with Golden State. This condition was part of the 76ers trading for Gerald Wallace.